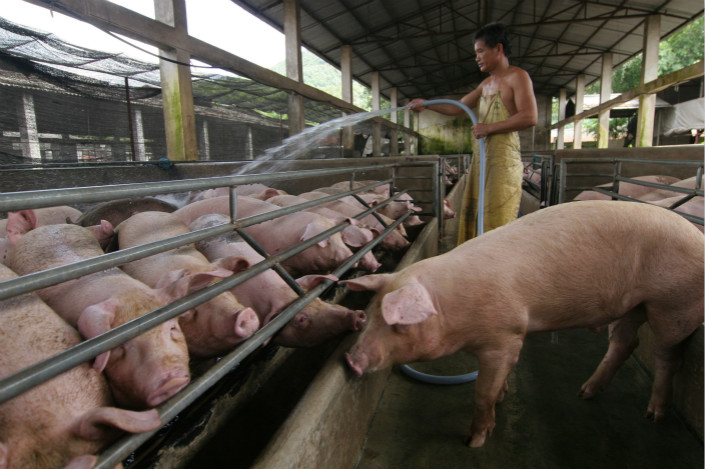 A farmer cleans pigs at a farm in Zhongshan, Guangdong province, in August 2016. Photo: IC

Chinese scientists have discovered that a bat-borne virus was responsible for killing 24,000 pigs in southern China last year in an outbreak with “striking similarities” to the SARS epidemic nearly 16 years ago, a new study has found.

The discovery offers scientists and public health official new insights into fighting outbreaks of diseases caused by animal-borne viruses such as severe acute respiratory syndrome, which killed more than 700 people in the early 2000s.

A novel bat coronavirus was the aetiological agent responsible for the outbreak of a fatal disease in hogs that killed 24,000 piglets on four farms from October 2016 through May 2017, according to a recent study published in the science journal Nature.

The virus cannot currently be transmitted to humans, said Ma Jingyun, a professor at South China Agricultural University who co-authored the study. The researchers have examined the workers who had close contact with the infected animals.

Ma said that no new cases of the disease have been reported.

After studying the virus using methods including gene-sequencing, the researchers found that the virus from the dead pigs was 98% similar to a virus carried by bats in a nearby cave, according to the study.

The bats were predominantly horseshoe bats, which are known to be the reservoirs of the SARS virus. While that disease was reported globally from late 2002 to mid-2003, 90% of the estimated 8,273 cases were in Greater China. The SARS virus was transmitted from bats to masked palm civets and eventually to humans.

The scientists said that “there were striking similarities” between the latest disease, named swine acute diarrhea syndrome (SADS), and SARS outbreaks “in geographical, temporal, ecological and aetiological settings.”

SADS began just 100 kilometers (62 miles) away from ground zero of the SARS pandemic, said Zhou Peng, a researcher at the Chinese Academy of Sciences and the lead author of the study, according to domestic media The Paper.

Zhou said that SADS and SARS are both caused by the coronavirus, and a horseshoe bat that the team studied simultaneously harbored a SADS virus and another one similar in appearance to the SARS virus.

“Coronaviruses are very capable of recombination, just like building blocks,” Zhou said. “It is uncertain what (the viruses) will recombine into in the future.”

“Bats have been recognized as one of the most important reservoirs for emerging viruses,” the researchers wrote. The flying mammal has helped spread other diseases, including Middle East respiratory syndrome (MERS) and Ebola.

It is important to identify “coronavirus diversity and distribution in bats to mitigate future outbreaks,” the researchers said.