In Depth: No Room for Cheap Cures 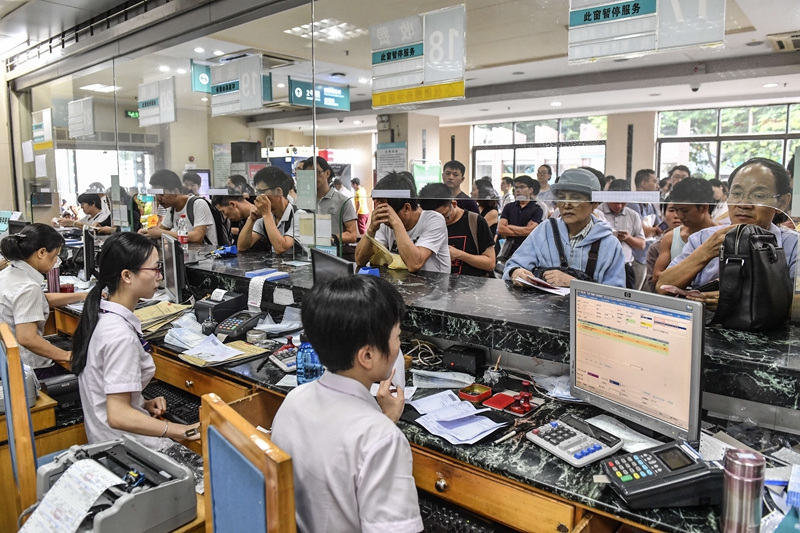 When the 29-year-old was diagnosed with hepatitis B a year ago, he began paying medicine bills of about 300 yuan ($48) per month, a sizable bite out of the 2,000 yuan a month he earns as a cook.

“It is like putting money into a bottomless hole,” said Liang, who is from the southwest province of Sichuan.

Liang’s story points to an uncured problem in China’s health care system — expensive prescription drugs largely controlled by cash-hungry public hospitals. Despite crackdowns by regulators, the system is said to be rife with dubious practices that drive up prices. Pharmaceutical companies, for example, are pressured to give equipment to hospitals and trips for doctors to secure sales, Caixin has learned.

An online drug retail industry sprouted up in China to offer a cheap and speedy alternative to people tired of high prices and long queues at hospitals. But the fledgling industry, posing a threat to hospitals’ near-monopoly over prescription medicines, has found itself strong-armed by pharmaceutical companies to raise its prices, Caixin has found. And now regulators are moving to further tighten grip on internet sales of prescription drugs, concerned about public safety.

Rising prices of prescription drug and coming decisions by regulators on venues where they can be sold will have a tremendous impact on the lives of people like Liang.

Early in his battle with hepatitis, Liang had to travel far to a large public hospital and wait in a long line to get his medicine. Then he found the same medicine on e-commerce websites that would deliver to his door.

About 100 million people in China infected with hepatitis B need regular medical treatment. Many of them also turned to the internet for cheaper and easier drug purchases as e-commerce services proliferated across the country. Online drug sales — largely of over-the-counter medicines — surged to 4 billion yuan in China in 2016 from just 100 million yuan in 2011, according to data from industry research institution Sinohealth.

But buying prescription medicine online may have legal concerns. In China, sales of prescription medicines are strictly limited to hospitals and licensed pharmacies, although sales of over-the-counter medicines have been opened to internet-only drugstores operated by e-commerce giants like JD.com Inc. and Alibaba Group Holding Ltd.

Internet companies have lobbied for years to get access to the large market of prescription medicines, and many medical experts suggest that opening the market will help to improve the transparency of prescription drug pricing, making them more affordable to patients. But regulators have been hesitant to take action, citing challenges of market oversight and concerns over public safety.

Some online drugstores have sought to partner with brick-and-mortar pharmacies to allow users to order prescription drugs on their websites, a practice allowing internet-only drugstores to tap prescription drug sales while skirting regulatory restrictions.

For consumers, big e-commerce sites offer them a platform to access offerings of drugs from different pharmacies, even those in remote locations, and place orders for the cheapest ones.

Wu Hai, a Hunan construction worker who also has hepatitis B, turned to an online drugstore at JD.com and found that its antiviral medicine cost about half of what he paid at a local hospital.

But that price break has been drying up, Liang and Wu say. In recent months, it’s been harder to get their medicines online, and prices have shot up.

Several pharmaceutical industry sources told Caixin that the recent price jump of hepatitis B drugs reflects a tactical move by pharmaceutical companies to force up a large number of medicine prices at nonhospital drug retailers and their online sites. Known as “price maintenance,” it is a common practice of drug producers to demand retailers to raise prices. Those who refuse to do so may face a cut of supply, a drugstore manager in the Inner Mongolia autonomous region said.

Industry statistics viewed by Caixin showed that between 2015 and 2017, drug retailers including online platforms at Alibaba, JD.com and Yaofangwang.com have received hundreds of demands to raise prices from 121 pharmaceutical companies, covering 521 types of prescription and over-the-counter medicines. The highest increase reached 1,880%.

Take Entecavir, for example — the antiviral medicine taken by Liang and Wu. The online retail price of a one-week dose of the drug produced by Suzhou Dawnrays Pharmaceuticals Co. has been raised from 40 yuan to 130 yuan after demands by the producer, said Zhong Yi, the e-commerce head of Yaofangwang.com, an internet-only drug retailer.

Cheap prices online posed a competitive threat to public hospitals, which accounted for more than 70% of China’s over 1 trillion yuan of both prescription and nonprescription drug sales in 2016, according to data from the Ministry of Commerce.

In the past, hospitals often added surcharges of up to 15% to all drugs sold in their in-house pharmacies, providing a key revenue stream. Last year, the country’s public health authority ordered public hospitals to stop the practice in an attempt to lower prices.

But even after the end to the surcharge, most hospital-sold drugs are still pricier than those at third-party pharmacies, Caixin learned.

As hospitals saw their sales fall off as consumers hot-footed it to internet platforms, they pressured drugmakers to push retailers to raise prices, sources said.

Similarly, Beijing-based Handian Pharmaceutical Co., in a letter issued in late 2016, ordered retailers “not to affect hospitals’ drug sales,” according to the document seen by Caixin.

The rise of internet retail platforms offered patients access to cheaper options. They have been able to make purchases across regions and thus affect sales of local hospitals. “It is something that drugmakers don’t want,” said a pharmaceutical company executive.

Industry sources told Caixin that the conflicts are mainly the result of the way pharmaceutical firms structure their sales networks.

Drugmakers usually set up separate sales teams to deal with sales with hospitals versus other retailers. Hospitals have to go through a complicated chain of intermediaries, including government agencies and hospital departments, while third-party retailers tend to be more transparent, with their prices impacted by market mechanisms. The sales networks have thus led to different prices at the end.

The price gap was not a big deal when nonhospital retailers remained marginal.

“But the fast growth of online sales with lower prices has affected sales of hospitals,” said a drugstore owner in Beijing.

For drugmakers, whether they sell to hospitals or nonhospital pharmacies doesn’t make a big difference in terms of profit when they ship the drugs out of their factories. But powerful public hospitals apparently play a very important role in deciding whether the products can reach individual patients.

Under China’s current system, drugmakers first need to make their products included on local governments’ procurement lists to become candidates to be purchased by public hospitals and by extension covered by people’s health insurance. Then, local sales agents negotiate with different hospitals to get their drugs into hospital pharmacies. Patients then buy the drugs based on doctors’ recommendations and prescriptions.

The whole process involves layers of negotiations in which a number of officials from government agencies and hospitals, as well as doctors, have a say.

An executive at a pharmaceutical company told Caixin that it often costs a lot for drug companies to get their products to be prescribed or recommended by doctors.

“All the officials and experts involved in the process need to be dealt with, and often with gifts,” the executive said.

Bribery cases linked to drug procurement are not rare in China. In one recent case, a sales representative of Henan Xinyi Pharmaceutical Co. was sentenced to a year in prison in December for offering bribes to officials in charge of drug procurement in Guangdong province.

Regulators have for years issued measures to restrict excessive added-on charges to public hospitals’ drug purchases and prohibit drugmakers from paying kickbacks to hospitals and doctors. But such practices continue.

Several industry sources told Caixin that pharmaceutical companies have continued paying hospitals and doctors for drug prescriptions and recommendations. The only change is that, rather than offering cash payments to favor their products, most companies have turned to paying for equipment and construction of facilities at hospitals, and for academic trips or conferences for doctors.

The complex chain behind the hospital drug supply results in much higher prices than those at nonhospital retailers. Meanwhile, localized price negotiations have also led to varying prices in different provinces for the same type of drug.

Regulators have stepped up efforts to bring under-the-table deals between drugmakers and hospitals to light to rein in drug prices. New efforts include closer scrutiny on drug companies and their agents’ invoices and tax payments to rein in irregular surcharges.

Some experts said a more-effective measure to fix drug-price distortion would be to further break public hospitals’ dominance in the market by allowing internet-only drugstores to sell prescription drugs.

Over the years, authorities have issued several policies ordering hospitals to make their prescriptions available for patients to buy drugs at licensed third-party pharmacies. But in practice, hospitals have often refused to provide prescriptions for patients to use outside the hospital. Only a few cities, such as Wuzhou in the Guangxi autonomous region, have set up government-backed electronic platforms allowing qualified pharmacies and patients to access hospital prescriptions.

But regulators have been hesitant to step in and fully open the gate to online drug retailers, citing challenges to supervising fast-growing online sales networks. Only qualified brick-and-mortar pharmacies are allowed to sell prescription drugs online. Some major internet-only drugstores have sought to make prescription drugs available on their virtual shelves by partnering with chain pharmacies.

Despite calls from the industry, regulators have moved to further tighten their grip on internet drug sales. Earlier this month, the State Food and Drug Administration revealed a draft regulation that would ban online retailers from partnering with brick-and-mortar pharmacies to sell prescription drugs. The draft rules completed public consultation phase on Mar.12, but it is unclear when they will take effect.

The gloomy regulatory outlook, along with pressure from drugmakers to increase prices, has forced many online drugstores to give up.

Yaofangwang’s Zhong said more than 260 online drug retailers had shut down business by the end of 2017, and his company is also weighing a business transformation.

“Drug retailers pursue thin margins on quick sales. After prices rose, no one would come,” a Beijing pharmacy owner said of consumers.

For patients like Liang, it means less choice. If the antiviral medicine he needs is no longer available online, he will have to travel every two weeks to the city hospital to buy it.