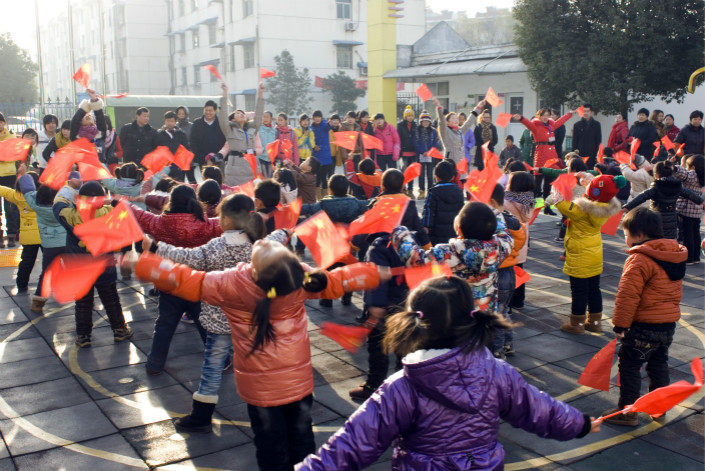 Kindergartners in Langxi county in Anhui province take part in an outdoor class in February 2017. A proposal at the annual Chinese People's Political Consultative Conference calls for more child care centers and improved teaching, particularly at facilities for children younger than 3. Photo: VCG

Delegates to this year’s two big political meetings in the Chinese capital are urging the central government to spend more on preschool education and child care facilities to address a supply crunch amid a nationwide push for young parents to have a second child.

A proposal by the Central Committee of China’s Association for Promoting Democracy — one of the eight minor parties that work under the ruling Communist Party — warned about the lack of skilled teachers and the poor teaching quality, sanitation and safety issues in Chinese kindergartens (preschools) and nurseries.

Authorities should mobilize all resources, both public and private, to open more child care centers and improve the level of teaching, particularly at facilities for children younger than 3, said the proposal presented at the annual meeting of the Chinese People’s Political Consultative Conference (CPPCC).

“The key is to develop preschools and care facilities that ordinary families can afford,” it said.

The annual meetings of China’s two major political organs — the CPPCC and National People’s Congress (NPC), the country’s top legislature — kicked off Saturday and will run through March 20.

In his proposal to the congress, NPC deputy Zhu Lieyu, from the southern province of Guangdong, urged lawmakers to include kindergartens and nurseries in the country’s compulsory-school system so that they can receive public funding and become more affordable.

“Existing facilities should also lower their age requirements to accommodate toddlers under the age of 3 and set up more junior classes to meet rising demand,” he said.

The calls come as demand for child care centers has jumped in the aftermath of China’s scrapping its three-decade-long one-child policy. The new policy, which has allowed all couples since 2016 to have two children, aims to ease the national economic burden from an increasingly aging population and a shrinking labor pool.

But the high cost and competition for child care and early-education facilities have deterred many young couples from having children.

China was roiled by a string of recent scandals at kindergartens and a day care center last year. In one high profile case, needle marks were found on at least eight children at a preschool in Beijing in December. In another case, five teachers at a nursery in Shanghai, that catered to employees of Ctrip, China’s biggest online tour operator, were arrested on Dec. 13 after videos of teachers slapping and shoving children were circulated online in early November.

Over 100,000 2-year-olds need child care in Shanghai, but existing facilities in the city can accommodate only 14,000, according to a survey by Shanghai Women’s Federation last year.

The severe shortage of care facilities for toddlers was triggered by a central government policy, in place since 2012, that no longer obliges preschools to admit children under the age of 3.

Even Chinese Premier Li Keqiang pledged “to work on multiple fronts to make more resources available for preschool teaching” when he delivered a government work report to the congress on Monday, highlighting the challenges facing kindergartens and nurseries.

“We should use the internet and other technologies to strengthen surveillance of classes so that parents can have peace of mind,” Li said.

But strengthening class surveillance wouldn’t tackle the root cause of the problems affecting China’s preschool system, according to professor Liu Yan at Beijing Normal University. Instead, regulators should work to improve the qualifications of kindergarten teachers and address the shortage of qualified teachers, said Liu, who is also a member of the top advisory body.

China has 2.5 million preschool teachers for 44.14 million students — or one teacher for 18 students — in comparison with one teacher for six to nine students in some developed countries, according to Xiong Bingqi, a deputy director of the 21st Century Education Research Institute in Beijing.