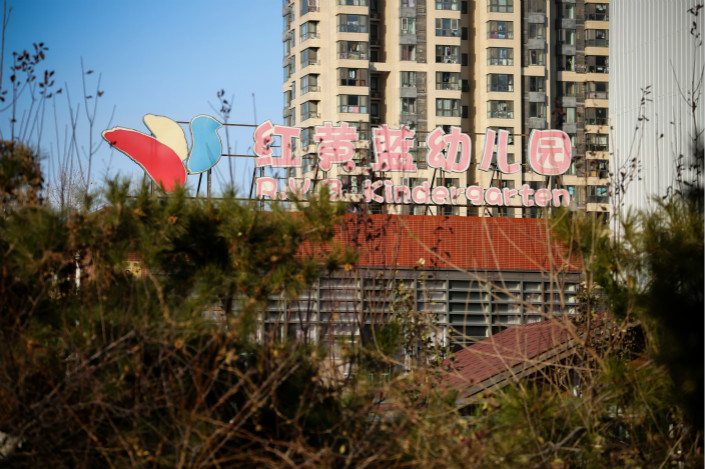 An official of the Supreme People's Procuratorate said that preschools' poor management and the lack of employee training and qualifications are to blame for the high number of child abuse incidents in the businesses. Above, an RYB Education kindergarten in Beijing was the site of a child abuse case in November. Photo: IC

Sixty-nine preschool employees have been arrested and 77 prosecuted for alleged child abuse in the past two years, China’s top prosecutor’s office said.

Those prosecuted included people who were arrested before 2016.

Zheng Xinjian, who heads the juvenile crime division at the Supreme People’s Procuratorate, said Thursday that poor management and lack of employee qualifications and training are to blame for the incidents.

China has been roiled by several high-profile incidents of child abuse in recent months.

The prosecutor didn’t offer details of incidents that lead to the 69 arrests or say how many of the 77 that went on trial were convicted.

Police and prosecutors haven’t shared much information on cases linked to preschool abuse until now, and the public has been largely left in the dark over the scale of such incidents in China. The media has also reported only a handful of arrests in the past two years.

In one case, four kindergarten teachers were arrested in early 2016 and later sentenced to over 2 1/2 years in prison after needle wounds were found on 28 toddlers at another kindergarten run by RYB Education in the city of Siping in Jilin province.

Provisions for protecting children at day care centers and preschools were scattered in several pieces of legislation, including the country’s civil and criminal code and the Marriage Law, which makes enforcement difficult, Zheng said.