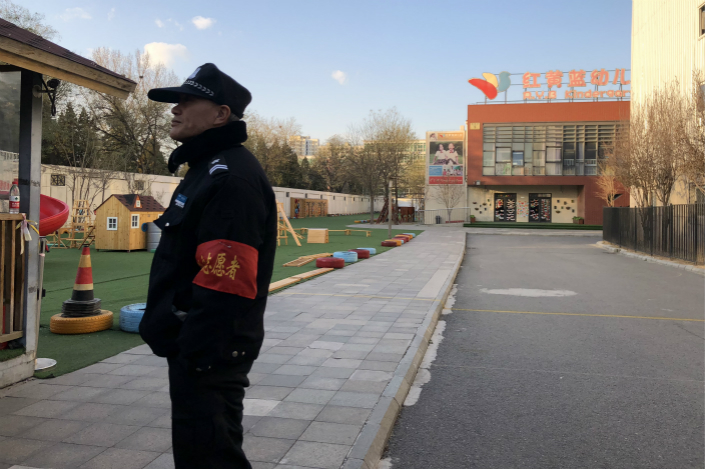 A security guard keeps a watchful eye in a kindergarten run by RYB Education Institution in eastern Beijing on Thursday. Some parents protested outside against alleged mistreatment of their children by teachers. Photo: Chen Weixi/ Caixin

Beijing police said on Saturday that they have detained a 22-year old female teacher as part of their criminal investigation into alleged child abuse at a Chaoyang district kindergarten operated by New York-listed RYB Education Inc.

The teacher, only given her surname Liu, was arrested after needle wounds were found on at least eight children aged 2 to 6 years at the kindergarten in eastern Beijing, according to police.


Some parents also accused teachers at this preschool of feeding children with unidentified “white pills and a brown color syrup” and even sexual abuse, claims yet to be backed up by investigators who are looking into the allegations.

The police said they have also arrested another woman, 31, also surnamed as Liu, for fabricating news and causing a serious negative impact on society.

The woman posted messages on social media saying soldiers of a famous military regiment were involved in a group molestation of children at this kindergarten, which is not true, police said.

The regiment with a nickname Tiger Regiment on Friday openly denied any soldiers were involved in this scandal.

Chaoyang district government also announced on Saturday that the principal of the kindergarten involved would be removed.

The incident came just two weeks after teachers at a Shanghai daycare center affiliated to China’s largest online tour operator, Ctrip, were caught on a surveillance camera kicking and slapping disobedient or crying toddlers under the age of 3.

The string of recent child abuse cases at preschools and daycare centers in China should prompt regulators to tighten oversight on both teachers’ qualifications and daily operations in such facilities, an expert said.

“These cases represent a larger problem of widespread abuses, only few of which have been exposed,” said Li Jiujin, a renowned professor of criminology and child psychology at People’s Public Security University of China.

These incidents are a “reflection of the incompetence of kindergarten teachers implicated in these cases,” said professor Li. The teachers may have adopted heavy-handed methods after they felt helpless while trying to comfort one crying or disobedient child, afraid that it could “trigger a chain reaction,” disrupting the whole class, according to Li.

“On the contrary, an experienced teacher would first separate that one child to comfort him or her to limit the impact on other children,” she said.

Being a preschool teacher is no less demanding than other forms of teaching work as they deal with psychologically fragile children who express themselves via emotions rather than reasoning or language, said Li. As a result, a kindergarten teacher requires more than just a diploma, but a deeper understanding of child psychology, emotions and patience, she said.

In many countries, kindergarten teachers are required to undergo a lengthy internship before they can work independently, according to Li.

It is not clear if the teachers under investigation over alleged mistreatment at the two facilities were fully qualified and how much professional experience they’ve had. A video clip being circulated on Chinese social media show police questioning several young women who have identified themselves as kindergarten teachers working for RYB Education about accusation of mistreating children. However, Caixin could not verify the authenticity of the video as well as the date and place it was shot.

Child abuse is punishable by up to three years in prison under the country’s criminal code. However, the effect of the as a deterrent against such problems is limited, according to Li.

Regulators must set higher standards for professional qualifications of kindergarten teachers and strengthen oversight on the operations of such facilities by installing surveillance cameras and through routine and random on-site inspections.

The scandals should also prompt a national debate over how to improve the country’s overall childcare system, and achieve a national consensus on whether public money should be spent on extending maternity leave or improving the preschool and daycare system, Li said.

Even when parents work full time, they should be given time to get involved in the running of their children’s kindergarten or daycare centers, she said. For example, parents can be freed of their full-time job for a few days every year to work at these facilities on a rotation basis to keep abuses and mistreatment at bay, she said.