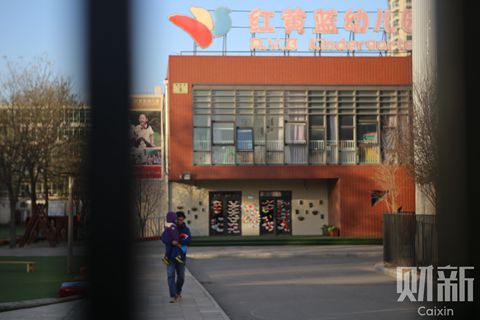 A parent on Thursday carries his child on his way out of the Beijing kindergarten accused of abusing children. The company that runs the facility directly operated 80 kindergartens and franchised another 175 preschools, in 130 cities and towns across China, as of June 30. Photo: Chen Weixi/ Caixin

Shares of a Chinese kindergarten chain operator plunged almost 40% in early trading Friday on the New York Stock Exchange after reports of child abuse allegations at one of its child-care facilities in Beijing.

RYB Education Inc.’s shares were traded around $16.4 Friday afternoon in New York, down 38% from Wednesday’s close and below the initial public offering price of $18.50 on Sept. 27. The IPO raised $102 million.

Beijing police are investigating allegations that children were abused at one RYB-branded kindergarten in Guanzhuang, a middle-class community in the eastern suburbs of Beijing. Parents alleged that at least eight children were molested by adults, were found with needle marks on their bodies, were made to stand naked, were locked in a dark room, and were given unidentified pills and a brown syrup.

According to a local education official Thursday, three teachers at the RYB kindergarten were suspended as police investigate the case. A medical examination of eight children confirmed that wounds were caused by needles, according to police.

In an urgent conference call at 7:30 a.m. Eastern Standard Time Friday in the U.S., RYB co-founder and Chief Executive Officer Shi Yanlai apologized for the “disturbance caused to the parents, the children and the society.”

Shi said she expected the police to conclude the investigation as early as Friday night, without providing an update on the incident.

The news broke Thursday after a protest by a group of parents outside the Beijing kindergarten and went viral on China’s main social media platforms over the American Thanksgiving holiday. Many on social media sites in China are urging investors to short RYB’s shares.

RYB also said Friday that its board approved a repurchase program for as much as $50 million of its American depositary shares during the next 12 months.

On the conference call, RYB’s CEO said the company is fully cooperating with police in the invagination and has turned over all surveillance footage and devices of the kindergarten to the police.

But in an earlier statement released by RYB, the company said it sued certain individuals for defamation, without admitting or denying the allegations.

Founded in 1998, RYB directly operates 80 kindergartens and has franchised an additional 175 preschools in 130 cities and towns across China. Nearly 20,500 children were enrolled in the facilities as of June 30.

RYB’s preschools have previously been involved in student abuse scandal. Last October, four teachers at an RYB kindergarten in Siping in the northeastern province of Jilin were jailed for 30-34 months over “mistreatment of students,” after needle marks were found on some students in November 2015.

The company is slated to report its first quarterly earnings as a publicly traded company Wednesday. According to the IPO prospectus, the company had net operating income of $6.75 million for the first half of 2017, up almost 30% from a year earlier.