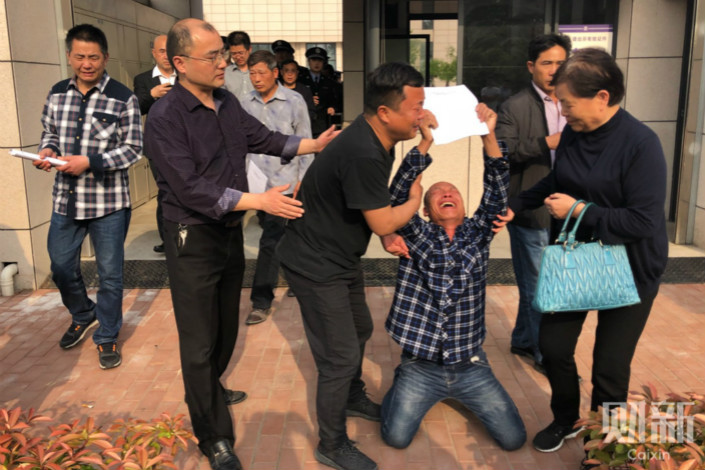 Zhou Zaichun, second from right, is overwhelmed with emotion on Wednesday after courts declared him and four other men not guilty of a 1996 murder for which they had already served years in prison. Photo: Xiao Hui/Caixin

*One man, imprisoned for 21 years, wants the police officers he alleges tortured him to be held accountable

Five men convicted of murder nearly 20 years ago had their convictions overturned on Wednesday by a court in East China’s Anhui province.

Zhou Jikun, Zhou Jiahua, Zhou Zaichun, Zhou Zhengguo and Zhou Zaihua — whose shared surname caused the public to term their sensational trial in the late 1990s the “Case of the Five Zhous” — have been cleared of charges that they attacked a village family, killing one member, in 1996, the court said in a statement.

The Anhui High People’s Court had found that the previous judgment by a city-level court in 1999 was based on insufficient evidence, and that there was reasonable doubt over the accuracy of key witness statements.

After an initial trial and a 2000 retrial, two of the five men had been given commuted death sentences, while one was given a life term and the remaining two sentenced to 15 years’ imprisonment. By January, all five had been released from prison.

The men have maintained that their confessions were extracted by the police under torture. The High Court told them that they could apply for compensation from the state. In response, Zhou Jikun, who was unfairly imprisoned for 21 years, said he didn’t want compensation — he wanted his torturers to be held accountable.

The case of the five Zhous regained the public’s attention after a 2014 report on their case by Chinese publication The Paper. In October 2016, the Anhui High People’s Court decided to begin a retrial process.

The case isn’t the first time a homicide verdict by the Fuyang City Intermediate Court has been overturned in recent years. In 2015, courts found that the convictions made by Fuyang’s court of five other people in a murder of another young woman in 1996 were unjust.

Zhang Hu, Zhang Dafa and Xu Wenhai — three of the men who had had their convictions overturned in that 2015 retrial — gathered at the entrance of the Anhui High People’s Court on April 11 to show their support for the five Zhous.

“The same group of public security authorities in Fuyang committed two similar miscarriages of justice,” the three men said. “We have the same pitiable fate and our 10 or so families have been fractured. To this date, no one has been found responsible (for using torture to extract confessions), and we demand an investigation into the people responsible for the miscarriage of justice all those years ago.”

China’s courts have regularly faced accusations of unfair practices, including extracting forced confessions. In one high-profile case in 2016, the Supreme People’s Court concluded that Hebei man Nie Shubin had not been guilty of committing rape and murder, exonerating Nie 21 years after his execution.

The Case of the Five Zhous began late at night on Aug. 25, 1996, in a village in Anhui’s Guoyang county, when a family was violently attacked in their home. The attack left four members of the family injured, and killed one, a woman named Zhou Suhua. The five men exonerated on Wednesday are related neither to each other nor to the victims, who were also surnamed Zhou; many residents of their village have the same surname.

After the attack, the five Zhous were arrested by local police in connection to the case. In late 1998 the men’s trial began at the local Fuyang City Intermediate Court.

During the trial, all five men disavowed their confessions, saying they had been tortured, and the judges involved in the case also believed that the evidence available was not enough to implicate the five, according to official information obtained by Caixin,.

Then, while the trial was ongoing, victim Zhou Suhua’s father, who himself had survived the attack, committed suicide by drinking poison. This startling turn of events led the judicial committee to reconsider their initial view of the case, eventually finding the men guilty of homicide.

The five Zhous appealed the judgment, but a retrial in 2000 upheld the court’s original verdict, while reducing the punishment for Zhou Jikun and Zhou Jiahua from death to commuted death sentences.

On Wednesday, after hearing that they had been exonerated after the long struggle to clear their names, the men began to cry.