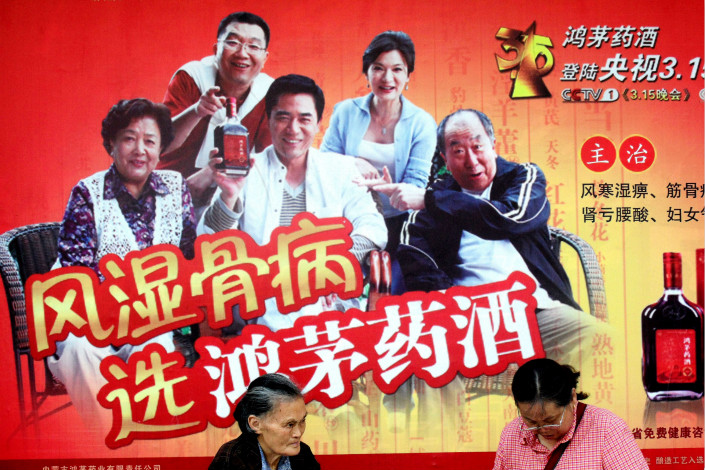 Authorities in Inner Mongolia have released a doctor who called a well-known “medicinal” liquor a “poison,” after news of his three months in detention provoked national anger over the handling of the case.

Police in the Inner Mongolia autonomous region confirmed (link in Chinese) on Sunday that Guangdong province-based doctor Tan Qingdong had been detained for nearly 100 days on suspicion of damaging the reputation of Hongmao Medicinal Liquor, which is sold across the country as an over-the-counter traditional Chinese medicine.

The rare cross-provincial arrest was initiated after a complaint by the seller of the product, Inner Mongolia-based Hongmao Pharmaceutical Co. Ltd. in December, Inner Mongolia police said in their initial official Weibo account post. Hongmao Pharmaceutical approached the county public security bureau to complain about a post Tan had published on Chinese social media app Meipian on Dec. 19.

Tan’s post, titled “China’s Mystical Hongmao Medicinal Liquor, Poison From Heaven,” urged the elderly not to drink alcohol due to its impact on their heart and blood vessels. He also wrote that some of the 67 listed ingredients of Hongmao Medicinal Liquor are toxic substances commonly found in traditional Chinese medicine, and questioned whether the liquor was really able to improve any of the conditions it claimed to treat, including coronary heart disease and irregular menstruation.

Tan’s post received around 2,000 clicks and cost Hongmao Pharmaceutical over 1.4 million yuan ($223,000) in losses, according to the public security bureau in Liangcheng county in Ulaanchab, Inner Mongolia.

Hongmao Medicinal Liquor is advertised, especially toward elderly Chinese, as a multi-purpose health elixir. Bottles of the dark-red liquid sell for around 290 yuan ($46) on Hongmao Pharmaceutical’s official store on e-commerce site Tmall.

Tan’s intention was to counter what he saw as harmful, false “propaganda” by Hongmao Pharmaceutical, which was especially harmful to elderly people who lacked medical knowledge, he said in a statement provided by his attorney. His article had not been written to further any commercial interest, he said.

News of Tan’s detention was met by an immediate backlash from members of China’s popular Weibo social network. Over 40,000 users reposted the police announcement, including many who added comments in support of Tan and criticizing police handling of the case. User Wuyuesanren said (link in Chinese) his own Weibo post on Hongmao Medicinal Liquor had already received several million views, and asked, “When will your esteemed bureau decide to arrest me?”

Even state-controlled media outlet People’s Daily said (link in Chinese) the company must be responsible for how it advertises its product, and “should not once more use false health care advertisements to earn profits.”

Hongmao Pharmaceutical did not respond to Caixin’s multiple attempts for comment. The official website (link in Chinese) of Hongmao Pharmaceutical claims that its product was first manufactured in 1739, and includes a section on the alleged healing properties of traditional Chinese medicinal liquors.

After facing criticism from social media users and state media alike, Inner Mongolia authorities announced (link in Chinese) on Tuesday afternoon that they had found the “current facts of the case unclear, and the evidence insufficient,” and that Tan could be released on bail.

Hongmao Pharmaceutical has faced both public and official censure in the past. The company’s advertisements had been found to be violating laws on 2,630 occasions in 25 provincial-level regions in China, and Hongmao has been ordered to stop selling its products at least 10 times, according to a health publication run by the People’s Daily.

Hongmao Pharmaceutical has also taken heat for its product’s alleged ingredient list, which includes leopard bone. A Weibo post (link in Chinese) last month by telemedicine startup Chunyu Yisheng called into question the legality of Hongmao’s use of leopard bone, and criticized the company for endorsing the commercial use of endangered animal parts.