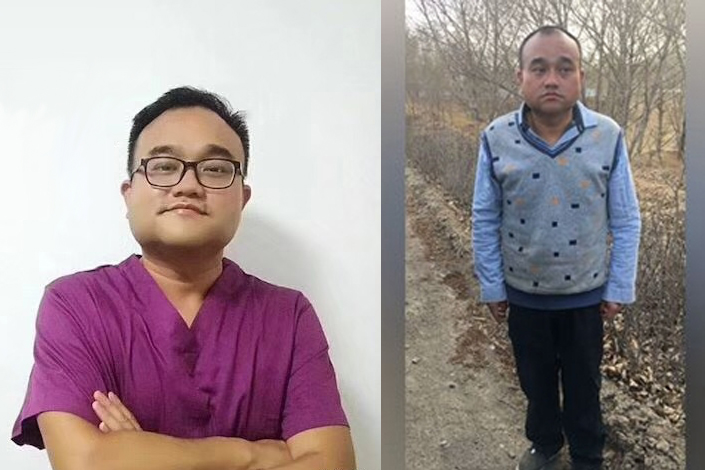 Photographs of Tan Qindong from before (left) and after he was detained for nearly 100 days by Inner Mongolia police.

When doctor Tan Qindong took to social media to criticize a widely advertised “medicinal” liquor, he believed he was helping protect the elderly and patients with high blood pressure, whom he felt could be harmed by the traditional tonic.

Then, he found himself arrested one night in January at his home in Guangzhou, interrogated, driven to Shenzhen and then Beijing, and finally to the Inner Mongolia autonomous region — home to Hongmao Pharmaceutical Co. Ltd., the producer of the medicinal liquor.

Police in Inner Mongolia revealed Sunday that Tan had been detained for nearly 100 days on suspicion of damaging Hongmao Pharmaceutical’s reputation. News of his detention provoked outrage from social media users, China’s national medical association and even state media columnists.

Tan was eventually released on Tuesday, after Inner Mongolia authorities found the “current facts of the case unclear, and the evidence insufficient.”

Caixin spoke with Tan by phone before his return to Guangzhou on Wednesday. The following excerpts from the interview have been translated from Chinese and edited for length.

Caixin: What led you to write your article about Hongmao Medicinal Liquor?

Tan Qindong: One of my WeChat friends suggested I write a popular science article after he read one about (eye-drop manufacturer) Shapuaisi Pharmaceutical. I already had the habit of writing popular science articles. I had long felt that there were problems with Hongmao Medicinal Wine, and that there was false advertising. I couldn’t find any clinical trial data on the State Food and Drug Administration’s official website, and (Hongmao Pharmaceutical) has already been heavily penalized by many local food and drug regulators — precisely because it exaggerated the benefits. Elderly people with heart disease and diabetes should not drink medicinal liquor. China has over 200 million elderly people, over 200 million people with high blood pressure, and over 100 million people with diabetes.

Many old people will buy this medicinal liquor after seeing the advertisements. And what is the result of drinking it? I wanted to catch their attention, and use strong words to provoke the elderly, to let them read this article and stop buying it. If they wish to buy it, they should first consult a pharmacist and make the purchase based on evidence. The point is, I used intense vocabulary precisely to warn the elderly suffering from chronic diseases.

Do you think your description of the wine as “poison” was excessive?

The content of the article is popular science. It has been proved by many medical experts. I have not fabricated anything.

After you wrote the article, were you approached by anyone working for Hongmao Pharmaceutical?

What happened and who was present when you were arrested?

At around 10 p.m. on Jan. 10, I encountered two police officers by the elevator in my building. They said they were police from the Chebei (an area on the outskirts of Guangzhou) police station, and presented their police ID, and asked me if I was Tan Qindong. I was afraid that they were bad people, so I ran upstairs. I was nervous at the time so I called the police. And then the two officers restrained me. Four people arrived in total to take me to the Chebei police station. That evening they conducted the first interrogation. Afterward they sent me by car to Shenzhen. I stayed in Shenzhen for one night. Early the next morning, I was put on a high-speed train to Beijing, where I arrived at around 5 p.m. or 6 p.m. that next day.

Aside from police officers, was anyone else involved in your arrest?

After I got off the train in Beijing, a minivan took us toward Liangcheng (a county in Inner Mongolia). On the way there, someone in the car said they wanted to smoke, and the person next to them responded, “Don’t smoke, the chairman doesn’t smoke, and he’ll scold us if the car smells different.” That was when I began to have suspicions, whether this person was a Hongmao Pharmaceutical executive. After that, we reached the Liangcheng County Public Security Bureau. There, they interrogated me for the second time. After the interrogation they sent me to the Liangcheng county detention center, and during this process I was searched twice.

On the official arrest date of Jan. 25, Zhang — the leader of the Liangcheng police economic investigation team — and the person I suspected was a Hongmao executive, were both present at the announcement of my arrest at the detention center, but (the suspected Hongmao executive) didn’t speak.

Were you threatened, tortured, or forced to make a confession in any way?

To be honest, there was none of that.

Tell me about your interactions with your lawyer.

In March, I wanted to get out and return home. My heart was torn in two. Half of me longed to go home, because I hadn’t been present at my father’s 70th-birthday celebration and felt miserable about that for a while. When I heard people in the detention center saying there was the possibility of pleading for leniency, I decided to give up and get things started. If I could go home earlier I would just go home earlier, so I asked (my lawyer) to help me make a guilty plea.

Why did you change your mind later?

Before March, I just wanted to go home. But afterward, while I was in detention, I saw that Hongmao Medicinal Wine ads were still on the air, and I had a change of heart, and felt that I really had been wrongly accused. A person’s inner feelings can really be very contradictory, and the two ways of thinking were repeatedly entangled.

What did the Liangcheng police want to know?

The head of the prosecutor’s office arrest section felt that there was no problem with the article, so why were you still detained?

Has the experience changed you?

It taught me how to interact with all sorts of people, and also taught me how precious freedom is. I’ve learned to cherish the present. But I don’t regret writing the article and getting arrested as a result. I suppose this was just one of life’s trials.