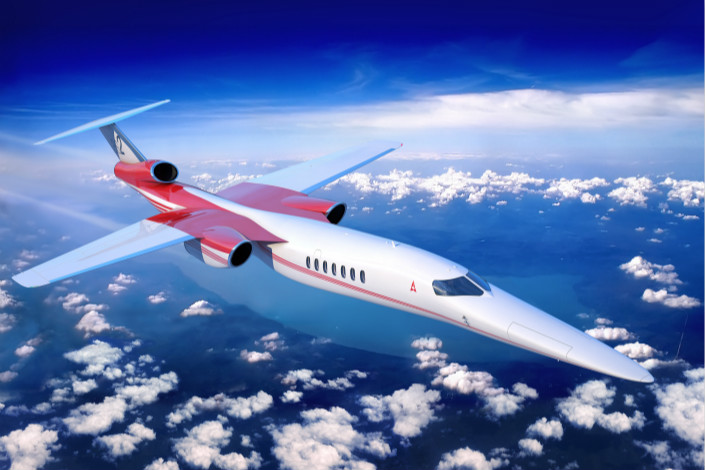 An artist’s rendering shows a proposed jetliner of Colorado-based Boom Technology, which is trying to revive supersonic commercial travel after an absence of 15 years. Photo: IC

* Colorado-based startup is designing the first commercial supersonic jetliner since the Concorde, and hopes to bring the technology to China travelers

Leading Chinese travel platform Ctrip has invested in a U.S. supersonic airplane startup, Boom Technology, as the high-speed technology soars back toward commercial use.

But further details of the deal were not disclosed in a statement Wednesday by Ctrip.com International Ltd. The absence of such details often suggests the investment is modest.

“Boom and Ctrip are working together to bring supersonic flight to China,” Ctrip said in its statement. “And leveraging its extensive knowledge of the Chinese market, Ctrip will help Boom accelerate its ongoing partnership efforts with airlines in China.”

Boom is partly patterned after the now-defunct Concorde, a British-French turbojet-powered airliner and pioneer of the technology, which operated commercially from 1976 to 2003.

The Concorde jetliner, with a maximum speed of twice the speed of sound, was used by Air France and British Airways before ending operations, mainly due to its lack of commercial viability.

Like Concorde, Boom has focused on transoceanic routes, but aims to reduce costs to those similar to standard airline-industry prices. Boom said the technology is now ready to be accepted by regulators and travelers.

After a $10 million investment by Japan Airlines in December, Boom has now raised a total of $47.3 million.

In the tie-up with Ctrip, Boom hopes to bring the technology to the Chinese market, where international travel demand has surged with the country’s growing middle class.

The deal also marks Ctrip’s latest move to expand globally. The online travel agent previously formed an alliance with U.S. peer Priceline.com, and in 2016 it purchased online travel search site Skyscanner Ltd. for 1.4 billion pounds (about $1.7 billion at the time).