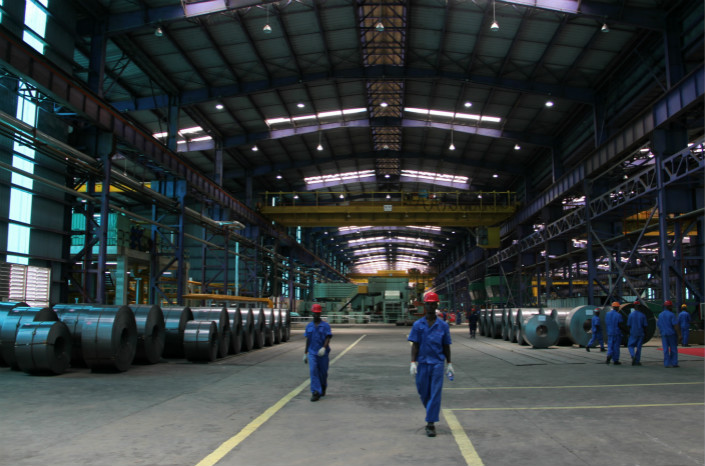 The Belt and Road Initiative reminds many people that this is going to be China’s own version of the U.S.’ postwar Marshall Plan, in which China uses its resources and industrial capacity to build economic relations with other developing countries.

But China’s way of international development cooperation is different with that of developed countries’ way of dealing with developing countries.

There are two major distinctions. First, China doesn’t give a lot of aid or grants to developing countries. Instead, China provides a lot of loans and investment, and also builds trade relationships with developing countries. One thing China has been doing is financing the construction of a lot of infrastructure, including railways, in some African countries.

Second, China also tries to promote industrialization in those countries. As we visited Ethiopia last year, on the factory floor we saw a lot of Ethiopian workers working for companies owned by Chinese investors, branded by American companies, and the products are going to be sold to the European market. We call that real globalization.

We know that China has been very successful in using special economic zones to attract foreign direct investment and build our own industrialization. This kind of practice has been transferred to other developing countries. According to official statistics, by the end of 2016, there were at least 77 special economic zones being established overseas, many of which are in Belt and Road-related countries. The number could easily go up to 100 by now. The zones have created a lot of jobs, and investments have been channeled into these zones, and products have been produced and exported to global markets.

Particularly in Africa, quite a few countries have set up special economic zones, either with assistance from China or inspired by what China has been doing in the past 30 years. Starting from Egypt in the north down to Zambia in the south, there are many special economic zones. Some zones are owned by local governments and they don’t necessarily rely on Chinese investors.

These examples show that building special economic zones is not just China’s effort to expand its influence or investment in Africa. This is actually a global effort that involves European countries and the U.S., other emerging countries, and African countries together to promote economic development.

China considers itself a developing country, as there are still many poor people in this country. But China has a unique experience in economic development for the past 30 years that is very successful. That kind of experience brought China from a very poor country to an upper-middle-income country. More than 600 million people have been lifted out of poverty. For those developing countries, this kind of experience is actually more relevant and more inspiring than what they can get from the Western countries, whose own such experiences took place more than 100 years ago.

There’s always a perception that Chinese investment in Africa always goes after the resources, like oil and other energy resources. My study shows that’s not the case. Actually, China has a strategy, and its investments there are quite diverse. Some investments are directed at resources, while a large chunk also goes into manufacturing. And manufacturing provides much potential for growth.

First, China has a comparative advantage in manufacturing that could be transferred to other developing countries. Second, manufacturing will have large positive spill-over effects on local economies by creating more jobs, bringing in more investments and connecting these economies to global markets. In the long run, it can bring mutual benefits to both the Chinese investors and the host countries.

Chinese investors also have to deal with political risks in those countries. They don’t have a well-functioning institution to protect their investments. There are no insurance mechanisms protecting against losses. What we see recently though is many Chinese investments, particularly those in Africa, follow the trails of historical Chinese foreign-aid projects. This means that for these regions and countries, certain connections and ties already exist, which allow investors to possess more information and feel more secure.

Nowadays, the U.S. is retreating from the world arena, which seems to give China more space to make a splash. But today’s world is not a zero-sum game, in which one’s loss is another’s gain.

Many global issues really require collaboration. It’s not as if the U.S. will retreat from this issue and China can take over. Many issues such as global warming, environmental protection and the nuclear crisis require collaborative efforts from the world’s two major powers.

After all, global issues are ideally tackled with a joint effort. I don’t think that current U.S. policies provide only opportunities for China — actually, they also bring along many challenges. China must rely on itself to take on issues such as those just mentioned and cannot count on the support of the U.S.

Zheng Yu is a professor of international studies at Fudan University. The article is based on his recent speech and follow-up interview at a symposium hosted by the Stars Foundation in Southwest China’s Chengdu province.