Opinion: Money Can Be a ‘Weapon of Disruption’ 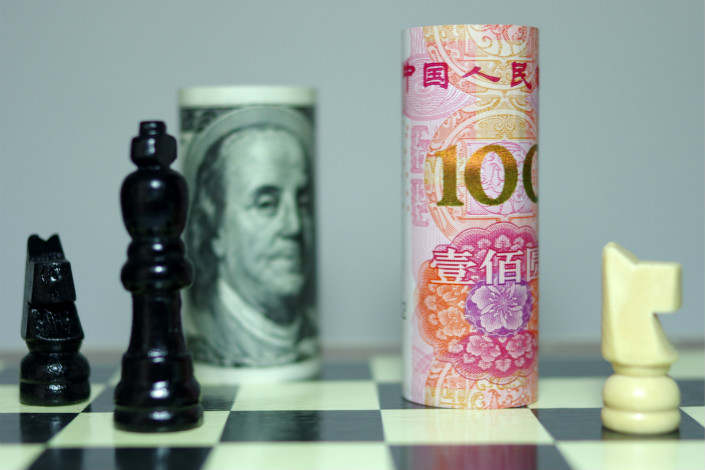 The growing risk of a U.S.-China trade war poses the question of whether such a conflict could escalate to include a currency war. So far, the U.S. Treasury Department has not designated China a currency manipulator, as China’s current account surplus has declined substantially and the yuan has been appreciating against the U.S. dollar.

We should therefore think through the full implications of broadening the concept of money into a geopolitical perspective.

Throughout history, money has always been national in construction. Primitive tribes often used rare commodities, such as cowrie shells, as a rudimentary form of currency. One problem with using shells, however, is that they are not uniform in size. When people started using coins, they minted them in a standard size. The concept of seigniorage was the difference between the value of a coin and the cost of production, which accrued to the king or state.

But very quickly, merchants and criminals discovered that they could debase the coinage, either by faking it or actually producing it with less-precious metals. The money was only as good as it is trusted, since very quickly, people found out that bad money drives out good money. Gresham’s Law basically reflected the self interest of all holders of coins to pass out the bad coins and keep the good coins. Counterfeiting and debasing of coinage, both by the private sector and by the state, is as old as the hills.

The stronger the state, the stronger the currency — and also the stronger the resources available to wage war and acquire more resources. Since money moved from coinage to bank credit, the state also benefited from borrowing to fight wars. The earliest central banks (Rijksbank in Sweden and Bank of England) were both established to finance wars, but they quickly evolved to become protectors of financial stability by taking on the function of the lender of last resort. The role of money was symbiotic with military power. It was costly to fight wars, so it required a sophisticated industrial power as well as a sophisticated financial system, all of which mutually supported the growing power of empire.

But money is only as good as the credit of the state and the banks that created loans. Over time, the state learned to protect the value of its currency issue as a standard, a unit and means of storage of value through an ecosystem that evolved more through practice more than theory. The Bank of England and other central banks learned the importance of tackling inflation and protecting the banks in order to maintain the value of their currencies.

Even though the United States’ gross domestic product (GDP) overtook Britain’s by 1870, it took more than 70 years of building not just the U.S. banking system, but also the stock and bond markets, reinforced by the Federal Reserve system, to make the dollar dominant in global finance. The hegemony of the dollar was essentially backed by the strongest military in the world.

But in the last decade since the global financial crisis of 2007, two factors have changed the geopolitical aspect of money. The first was a shift from a unipolar to a multipolar world, as the income and wealth of other nations began to catch up with the U.S.; namely, the European Union, China, India, Russia and even nonstate players, such as multinational corporations. The second was the rise of cryptocurrencies, which meant that the private sector could once again challenge the power of state money.

One way of thinking about this issue is the pre-Copernican view that the Earth was the center of the universe. After the 16th century, astronomer Nicolaus Copernicus proved that the Earth was only one planet circling the sun, and that our galaxy was only one of many galaxies, the concept of gravity (power) changed from absolute to relative. There is a clear parallel in terms of relative monetary power, which is also a function of economic and military power.

The International Monetary Fund has already recognized the rise of currency blocs. On the basis of purchasing power parity, the dollar bloc accounts for about 60% of global GDP, followed by 26% for the euro, 7% for the pound and 5% for the yen.

Among the problems of geopolitical rivalry is the rise of cybercurrencies. A recent Financial Stability Board review did not consider cybercurrencies a threat to financial stability because they (mostly bitcoin) make up less than 1% of global GDP. But because they are valued at a combined $500 billion, cybercurrencies are larger than most middle-income developing countries. Thus, they are not systemic risks for large advanced countries, but hugely systemic for emerging economies.

At a time when the dollar may strengthen as the Fed begins to increase interest rates, volatile capital flows (especially outflow flows from emerging markets) will threaten the financial stability of smaller states, especially those caught in between geopolitical rivalries or suffering from civil or military strife. Cybercurrencies are also valuable to criminals, terrorists and those who want to evade taxes and foreign exchange controls, as well as engage in other illicit activities.

One reason why advanced countries do not want to ban cybercurrencies is the upside element of “innovation,” especially in term of their potential to reduce the costs and security of payments. But because most electronic transfers already cost less than 1 U.S. cent per transaction, it is not clear how further innovation would improve efficiency. Blockchain or distributed ledger technology may improve security, but its security from hacking may actually keep regulators from detecting the dark funding of terrorism, crime and illicit capital flows.

In short, the geopolitical aspect of money is that it can be used as a weapon of disruption, not just by geopolitical rivalry, but also from criminal and terrorist elements. This puts a whole new perspective on the importance of safeguarding the integrity of money by the state and controls on the issue of fiat money by the private sector.

Money is a social convention that has value, depending on how it is used. It can help create growth, but it can also destroy. Monetary policy and financial stability authorities therefore need to carefully ponder the broader issues of the geopolitics of money.