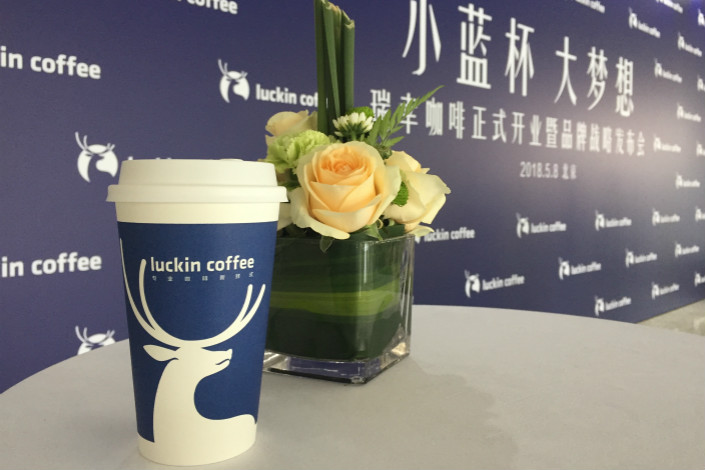 Beijing-based startup Luckin Coffee has already served 5 million cups of coffee to more than 1.3 million customers in 13 Chinese cities since the start of the year. Photo: Coco Feng/Caixin

*Delivery service draws ire of customers, who say they often don’t get their orders within the promised 30 minutes

(Beijing) — A new-concept coffeehouse that offers online ordering and delivery officially launched on Tuesday after a five-month soft opening.

Luckin Coffee, the Beijing-based startup, has already served 5 million cups of coffee to more than 1.3 million customers in 13 Chinese cities since the start of the year, company founder Qian Zhiya said on Tuesday.

Like any other cafe, Luckin offers customers a wide variety of coffees, as well as flavored teas, snacks and salads. However, the difference it is touting is that all orders are made through its mobile app.

Customers can choose to either pick up their order at a nearby Luckin cafe or have it delivered in 30 minutes for a fee. The startup currently has more than 400 outlets, which it aims to increase to more than 500 by the end of May.

Luckin has expanded faster than even Starbucks Corp., which opened 86 stores per month on average in 2017 in the China and Asia-Pacific market, the coffeehouse chain’s second-largest market after the U.S. “The coffee market in China is about to explode,” Qian said on Tuesday.

Chinese mainlanders consume four cups of coffee a year on average, compared with 750 for Europeans and 400 for Americans, Qian said, citing data from the International Coffee Organization and China’s National Bureau of Statistics.

Luckin’s coffee is priced about 15% less than the approximately 30 yuan ($4.71) for a cup of Starbucks coffee in China. The Chinese upstart also sponsors promotions such as a free cup of coffee for new customers and offers an ongoing buy-five-get-five-free deal.

Luckin can be competitive on price, said Zhu Danpeng, a food and beverage industry analyst with the China Brand Research Institute. Currently, China’s coffee market has Starbucks and Costa Coffee at the high end, followed by midlevel players like Luckin and the fast-food chains McDonald’s and KFC.

However, the problem is that delivery is costly. Add that to all of Luckin’s discounts and promotions, and they company is burning through money quickly, said Li Chengdong, an independent retail analyst.

Hu Xinyuan, a Luckin patron and occasional food reviewer, said that three of the five orders she made from March 1 to March 8 arrived after Luckin’s 30-minute deadline, including one order that was more than three hours late.

Another customer, Yuffie Qu, said that she gave up on Luckin after the company unexpectedly removed her home from its delivery area.

Luckin isn’t the only player in this nascent industry. Coffee Box, a startup with a similar business model, made its start in 2012 as the delivery service for Starbucks in China. In 2015, it created its own coffee brand. However, customers have also complained about its delivery service.

Coffee Box has raised hundreds of millions of yuan through four funding rounds. So far, the younger Luckin has secured funding only from angel investors, such as Lu Zhengyao, the chairman of Qian’s previous employer, a car-hailing startup called Ucar Inc. Several investment firms have also expressed interest in funding Luckin.