Customer Is Still Always Right — but There's No One to Tell 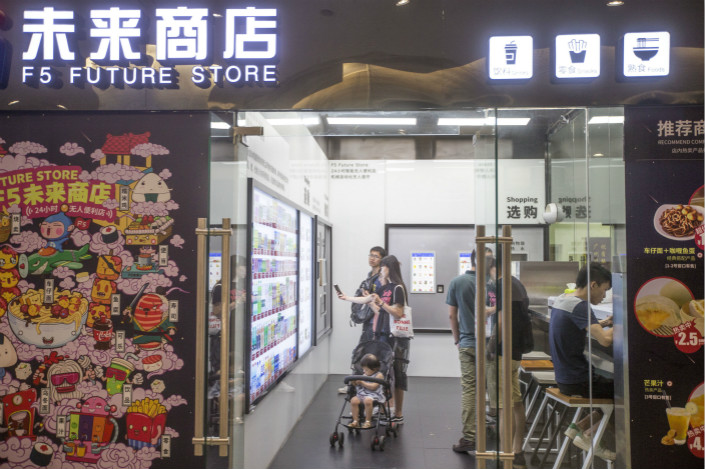 The F5 Future Store (above) in the southern city of Guangzhou is one of a growing number of staffless, brick-and-mortar shops opening in cities across China. Companies pioneering automated stores have attracted strong investor support, such as Bingobox, which raised more than 100 million yuan ($15.15 million) earlier this year. Photo: Visual China

A shopper inside the 24-hour Bingobox convenience store in Shanghai can browse shelves and pay for goods, yet never interact with another human being.

Getting inside the 15-square-meter retail space, which is far smaller than a conventional convenience store, simply requires scanning a doorway QR code with a smartphone. After perusing products from magazines to fresh vegetables, a shopper can proceed to a self-checkout machine and use a smartphone payment app to complete the deal.

Bingobox, which opened in July, is one of a growing number of staffless, brick-and-mortar retail outlets in cities across China. Its prototype was successfully tested in the southern city of Zhongshan, Guangdong province. Similar, peopleless retailers include Eatbox and Xiaomai in Beijing, and the F5 Future Store in Guangzhou.

Meanwhile, at least one company is testing a new type of cafe that serves drinks without a single barista. E-commerce giant Alibaba’s staffless Tao Cafe concept was tried for the first time in the eastern city of Hangzhou over a five-day period in July during the Taobao Maker Festival.

China’s staffless store companies are taking a cue from the Amazon Go automated market concept introduced last year in the United States by e-retailer Amazon.com Inc. And many of these Chinese companies are getting ready for big expansion projects. For example, Bingobox plans to open up to 5,000 outlets over the next five years.

It’s uncertain, though, whether no-staff stores and cafes will ever completely replace their conventional counterparts. Although automated retailers have learned how to get around China’s rising wage costs, technical hurdles still stand in the way.

The designers of the Tao Cafe system, which is still considered experimental, have tried to overcome technical hurdles tied to self-checkout machines by relying on a product-sensing door. If a customer leaves the store with an item, the door triggers an automatic deduction from the customer’s bank account through the Alipay smartphone payment app.

Since every customer in a staffless shop can be identified through his or her smartphone and a facial recognition system, personal shopping behavior data can be collected and later analyzed, Zeng said. The retailer can then use that information to create personalized services.

Alibaba says its staffless cafe system is more advanced than what’s in place at an Amazon Go store. “Amazon Go can take only 20 customers at a time,” an Alibaba staffer who worked on the project told Caixin. “But Tao Cafe can keep track of 50, with a customer misidentification rate of only 0.02%.”

Potential franchisees are now lining up in hopes of working with Alibaba. “The phone has been ringing off the hook lately,” said Ying Hong, general manager of Alibaba’s Alifish intellectual property licensing arm, which is involved in the franchise initiative. “All of the callers have been asking about cooperating” with the cafe project.

Meanwhile, Bingobox is working toward building and operating its own a nationwide chain of automated outlets in a quest to benefit from cost savings.

Bingobox’s predecessor was a grocery delivery service co-founded by Chan called Bingo Fresh that eventually started selling fruit and other items at self-service shops. The next step was Bingobox, which Chan envisioned as a way to reduce the convenience retailer’s “sunk costs,” such as the cost of setting up a new shop.

Opening an automated shop costs about 100,000 yuan, about one-fourth the cost of a typical convenience store, according to Bingobox data. A staffless shop’s operating costs total 2,500 yuan a month, far less than wages for the three-person staff that’s needed to run a typical, 24-hour shop. And up to 40 Bingobox outlets can be serviced, maintained and stocked by a four-person maintenance team.

Moreover, the company has found that a small Bingobox shop’s sales can equal those achieved by a convenience store with more than twice the floor space.

“I want to build the optimal network for moving products,” Chan told Caixin.

But staffless retailing has its shortcomings, said Aurora Private Equity’s Investment Director Yu Xi. For example, he said, automated shops cannot easily offer customers the high-profit-margin prepared foods such as sandwiches and salads that account for more than 30% of sales at traditional retailers such as the 7-11 convenience chain.

A challenge for Bingobox came to light in July during a summer hot spell in Shanghai: The shop’s chocolate and candies melted on shelves. Cleaning up the mess took more than a day.

Staffless stores also face competition from vending machines, which are becoming increasingly common in China. According to the market research firm Kantar, more than 1.38 million vending machines will be installed nationwide by 2020, up from 150,000 in 2015.

Vending machines may be tweaked and upgraded to offer the same products as automated stores, said Chen Haibo, founder of the retail automation company DeepBlue Technologies. “It’s not a zero-sum game between unstaffed stores and vending machines,” he said.

DeepBlue and similar companies are working toward perfecting a totally seamless shopping experience so that a customer need not pause to scan a QR code.

Moreover, automated retailers have learned that people can outsmart their machines. A Beijing News reporter recently tricked a staffless Eatbox outlet’s cameras and walked away with products without paying. The reporter later returned to pay Eatbox before writing about the experience.