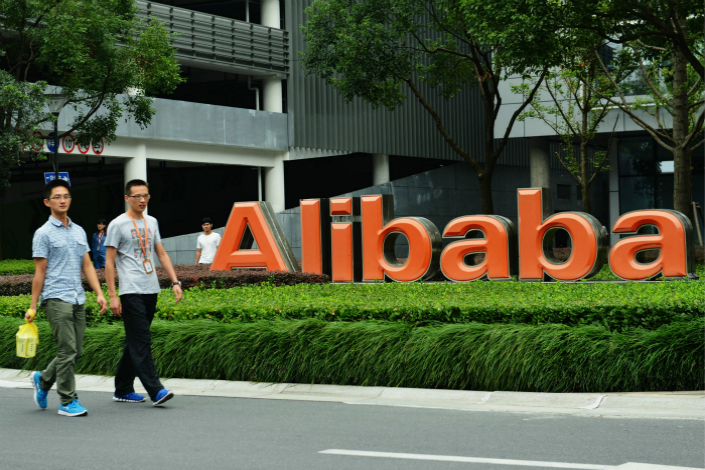 Alibaba Group Holdings Ltd. is strengthening its offline operations, with one goal to rebrand 10,000 mom-and-pop stores under the name of its online marketplace, Tmall. Above, Alibaba's Hangzhou headquarters are seen on Aug. 11. Photo: Visual China

Major e-commerce companies have been taking a greater interest in traditional retailers since they started making a cautious comeback earlier this year as online retailing has suffered setbacks like counterfeit-goods scandals. Hoping to ride the tide, Alibaba Group Holdings Ltd. is strengthening its offline operations.

The Alibaba Distribution Platform (ADP), a retailer management system established in May 2016, offers marketing, logistics and training services to independent shop owners. The platform also collects and provides data to help them predict customer demand and keep up with consumer tastes.

One of Alibaba’s goals is to rebrand 10,000 mom-and-pop stores under the name of its online marketplace, Tmall.

Alibaba has already invested in the supermarket chain Lianhua, formed partnerships with retail giants that include Suning and Bailian Group, and incubated online-to-offline grocery retailer Hema.

However, it lacks resources and data on independent family-run stores, which are scattered around neighborhoods, townships and villages and have the closest ties with locals. In China, they can be kiosks peddling ice cream or stalls selling nuts.

There are more than 6 million of these stores, most of which are family-run, said Lin Xiaohai, Alibaba vice president and ADP general manager, at a news conference on Monday.

ADP has more than 500,000 clients. Lin said that the platform’s gross merchandise volume has jumped 50% on average each month over the past three months.

Alibaba rival JD.com Inc. is also stepping up its presence in traditional retailing. In April, the online retailer announced plans to open 1 million convenience stores in five years, half of which will be located in rural China. Part of the plan is to rebrand these mom-and-pop shops as JD.com stores, the company told Caixin.

In remaking local retailers, JD.com will focus on decoration and inventory supply, while Alibaba aims to concentrate more on data.

On Monday, Alibaba also showcased its futuristic convenience store technology, such as automated billing. The company showcased similar concepts at an experimental unstaffed convenience store, which customers could enter by scanning a QR code at the door, then pick up their favorite items and automatically pay at the checkout gate.