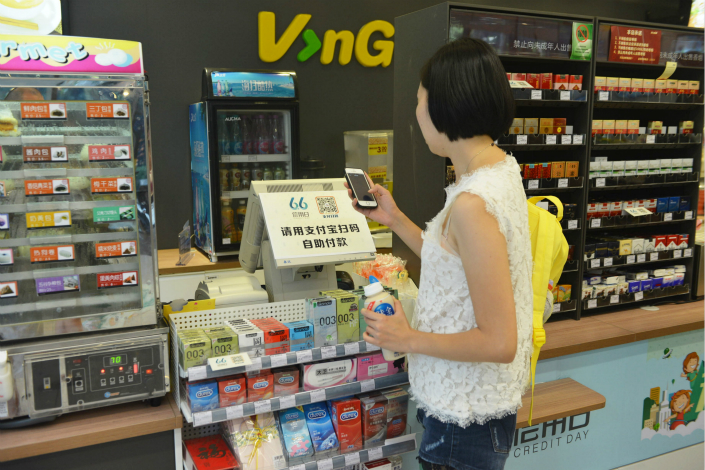 A customer pays for a yogurt at an unmanned supermarket in Hangzhou, Zhejiang province in June 2015. Photo: IC

Patrons can enter Alibaba’s futuristic Tao Cafe by scanning a QR code at the entrance. They can then pick up their favorite items — from cushions to notebooks to cookies — and automatically pay at the checkout gate.

The whole process is built using computer vision, biometric recognition and sensing technologies to track customers and their purchases. Up to 50 people can shop at a time in the 200-square-meter store, which opened on Saturday for a five-day pop-up event in the eastern city of Hangzhou, where Alibaba Group Holding Ltd. is based.

The store’s development team has tested various scenarios to prevent shoppers from generating an incorrect purchase bill, such as when two customers take items close to each other, or when a shopper wearing sunglasses has his or her face partially obscured from the sensors.

So far, the frequency rate of the sensors mistaking shoppers has been 0.02%, while the rate of incorrectly recognizing goods has been 0.1%, employees from Alibaba’s former financial arm Ant Financial Group told Caixin.

The project comes as the concept of staffless convenience stores has been making headlines recently, both at home and abroad. E-commerce giant Amazon sparked market interest when it revealed the concept of Amazon Go stores, and Japanese-owned convenience store brands Lawson and 7-Eleven have rolled out similar tests. In China, French supermarket operator Auchan launched its first unmanned convenience BingoBox store in Shanghai in May, and Chinese snack maker Wahaha launched five such stores in Hangzhou in June.

Alibaba is not simply developing a unmanned convenience store, but a “smart store” that automatically tailors the types of items on display as a shopper approaches a shelf, based on the his or her status, said Zeng Xiaodong, senior technical advisor at Ant Financial.

For example, when a customer walks into the store sweating after a game of basketball, the shelves will automatically offer them different types of energy drinks or adhesive bandages to choose from.

However, in-store theft and technological bugs present obstacles to this emerging business model.

Supermarket chain China Resources Vanguard ran an unmanned pop-up store in the eastern city of Hangzhou, Zhejiang province, for a day in June 2016. It ended up losing 3,000 yuan in goods to shoplifters, the government-backed newspaper Beijing Business Today reported.

BingoBox has since last Friday suspended operations to carry out technological upgrades. The shelves and glass exterior couldn’t withstand summer temperatures and excessive heat influenced the quality of some of the items in the store. The cooling system is currently being improved, the official China News Service reported.