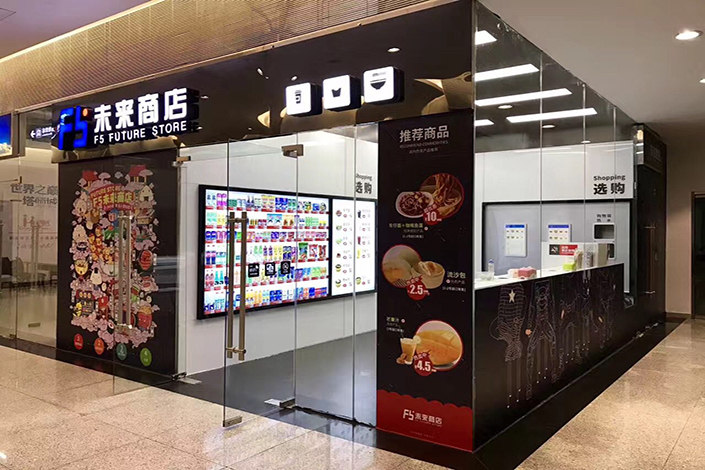 F5 Future Store will use its newly raised funds to upgrade its supply chain and accelerate its expansion. It plans to open as many as 50 stores over the next six months. Above, a view of the F5 Future Store near the Canton Tower in Guangzhou, Guangdong province. Photo: F5 Future Store

(Beijing) — A Chinese operator of unmanned convenience stores has secured 30 million yuan ($4.4 million) in its latest fundraising round.

The stores — which serve customers without shop assistants — have become an emerging business model that many insiders see as the future of retail.

F5 Future Store, which has one store in the southern city of Guangzhou, will use the new funds from Sinovation Ventures to upgrade its supply chain and accelerate its expansion. It will open 30 to 50 stores in up to six months, according to a post by Sinovation.

The 35-square-meter F5 shop in Guangzhou consists of two counters for food and goods, a beverage-maker and a self-cleaning dining table. Customers can order and pay for products at a special terminal or wirelessly with their smartphones. The retrieval of goods and cleaning of tables is done solely by robotic arms attached to the appliances.

Shoppers receive their items in under a minute without having to line up to check out.

“It was so much fun, and I felt at ease. The store has a high-tech feel,” said a customer named Chloe who commented in May on the Chinese restaurant review site Dianping.

“It is a brand-new business model, which attracts customers,” wrote another customer named Casablanca. “But the table didn’t clean itself that well.”

The unmanned convenience store is a nascent industry that is attracting big companies both in China and abroad. E-commerce giant Amazon sparked market interest when it revealed its concept of Amazon Go stores, which allow shoppers to walk in, pick up goods and leave without interacting with anyone. Technologies including computer vision, deep-learning algorithms and sensors help track what buyers take and then bill their accounts.

Earlier this year, Walmart began testing its new Scan & Go service, in which users shop on a smartphone app and pick up their purchases at a nearby store.

“Person-less stores, which provide standardized products and simple services, will be the next trend in the retail industry,” said investment manager Ruan Fei from Sinovation Ventures.

But theft remains a concern. Supermarket chain China Resources Vanguard ran an unmanned pop-up store in the eastern city of Hangzhou, Zhejiang province, for a day in June 2016. It ended up losing 3,000 yuan in goods to shoplifters, the government-backed newspaper Beijing Business Today reported.

“Person-less convenience stores have potential, but two factors will determine whether they become an investor favorite — if the population is well-behaved and if the cost of the technology can be reduced,” Lawson China Vice President Zhang Sheng said at an online seminar organized by retail information provider LinkShop.