Traditional Retailers Begin to Rebound After Years of Decline

By Chen Mengfan and Teng Jingxuan 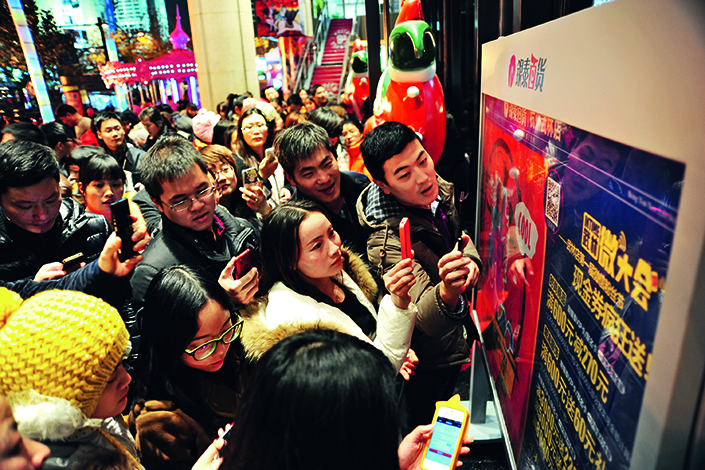 Shoppers scan a promotional QR code in front of an Intime department store in Hangzhou, Zhejiang province, on Dec. 31, 2013. Major department stores in China saw their revenues increase by 2% to 8% in the first two months of 2017, significantly better than the first quarter of 2016. Photo: Visual China

After years of stagnation and fierce competition from the booming e-commerce market, China’s traditional brick-and-mortar retailers are now making a cautious comeback.

In the first two months of 2017, major department stores saw increases in revenue ranging from 2% to 8%, significantly more than the first quarter of 2016, while supermarkets’ revenue grew by about 2% on average, according to a recent report by Haitong Securities Co. Ltd.

Major traditional retailers are showing signs of what reports from Guotai Junan Securities Co. Ltd. and TF Securities are calling “a mild recovery,” and decadelong efforts to integrate offline businesses with online platforms may finally be paying off.

From Window Shoppers to Followers

Traditional retailers have for years been trying to take more of their business online, launching websites and setting up official accounts on social media platforms like WeChat and Weibo. But one of the biggest struggles has been in converting offline members, a mainstay of traditional department stores, into online customers.

In 2014, one of the worst years in the past decade for China’s traditional retailers, Liu decided to join Dashang Group to lead their online operations.

At the time, a Dashang executive mentioned to Liu that Dashang had nearly 20 million department store members, adding: “When you join us, you can make use of this list of members, and we will be able to grow.”

But Liu realized right away that offline memberships have limited usefulness for traditional retailers hoping to transform their businesses. “To begin with, the data is incomplete. Traditional retailers’ member information includes at most a name and phone number, so there is no way to accurately identify users. Additionally, you are able to communicate with members only via SMS, and there’s no interaction,” Liu said.

In 2015, Dashang, one of the country’s largest department store operators, began tagging products sold at its department stores and supermarkets with QR codes, which customers are encouraged to scan using their smartphones.

The QR codes allow customers to use mobile-payment apps in Dashang stores, while prompting them to sign up for a 51tiangou.com account or follow the store on WeChat. Once a customer has done this, Dashang has a way to interact with the customer even after they have left the physical store.

Department store staff can share photos with customers of celebrities shopping at a mall, or let individual customers know when a clothing item they tried on is back in stock in their size, Liu said.

Dashang Group currently has 159 physical outlets connected to the 51tiangou.com app, and 80% of products sold in Dashang stores are now equipped with QR codes, Liu said.

There are currently 7.4 million registered users on 51tiangou.com. In February 2017, the number of active users reached 2.11 million, and Liu expects the online platform to bring in at least a 5% increase in sales volume this year.

In China, department stores get most of their revenue from concessions, which involve brands paying to rent space within the department store and offering the store a cut of sales revenue.

For years, department stores played the role of landlord and took a hands-off approach to concessions’ inventories, but this minimalist approach to product management has become an obstacle to innovation for traditional retailers.

In the fast-growing field of cross-border shopping, however, traditional retailers have sensed an opportunity to assert greater control over product management.

Counterfeit imports are a major concern for Chinese customers buying imported goods online. On Alibaba’s Tmall Global platform, customers who leave reviews almost always mention this fear, either by reassuring others that the products are indeed genuine, or by expressing their suspicion that they have received counterfeit goods.

Traditional retailers like Hefei Department Store Group Co. Ltd. believe that brick-and-mortar stores have the advantage of allowing customers to examine and test products in person before committing to a purchase, and have opened physical showrooms where all products are directly sourced and marketed by the company, rather than by concessionaires.

Hefei Department Store opened its first 3,000-square-meter exhibition and sales center offering over 25,000 different imported products in its hometown of Hefei, Anhui province, in July. Customers can make purchases in person, or place orders on Hefei Department Store’s app, Baidayigou. The company now has four such centers, and hopes to open 16 more this year.

According to deputy general manager Zhang Tongyang, Hefei Department Store’s Baidayigou platform has attracted younger customers, and the app has amassed 400,000 registered users within half a year.

Another weakness of traditional retailers is that physical stores, unlike online stores, occupy a finite space.

In the past, retailers worked around this problem by either expanding floor space or rearranging store layouts to fit as many brands and products into stores as possible. Now, traditional retailers treat online platforms as ways to virtually expand their floor space, and direct more customers to their physical stores.

Online retailers have been aggressively expanding their fresh food retail arms in recent months, and brick-and-mortar retailers are joining the fray in an effort to defend their traditional dominance in fresh food distribution.

Yonghui Superstores Co. Ltd., China’s fourth-largest hypermarket chain as of November, recently set up a similar online-to-offline concept, which it calls “Super Species.” There is currently only one Super Species offline store, but a Yonghui staffer told Caixin that 24 more stores are due to open this year.

At the same time, traditional retailers are still expanding the way they always have — by building or acquiring more floor space.

Positive change seems to be in the air for traditional retailers. Nevertheless, industry insiders remain anxious about the outlook for brick-and-mortar stores.

Even as offline retailers rush to move online, internet retailers are starting to take more of their business offline.

JD.com, for example, announced last month its plans to open 10,000 brick-and-mortar stores by the end of this year in order to reach more rural consumers.

The entry of e-commerce companies into the offline market can often mean cooperation between traditional and internet retailers, and could give traditional retail a much-needed boost.