Galeries Lafayette Cements Return to China With Mall in Shanghai 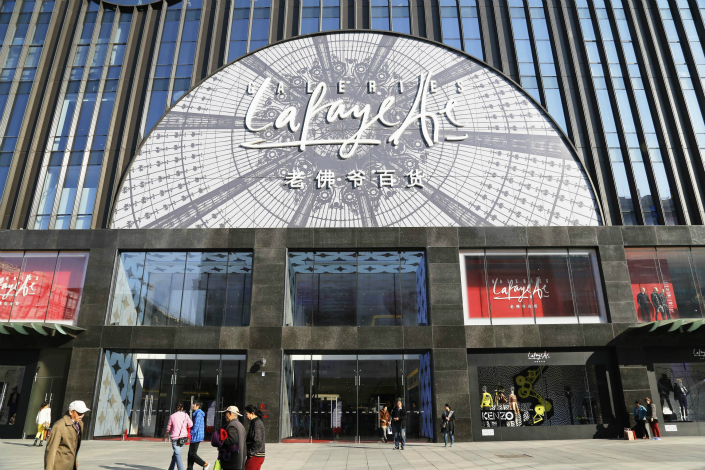 French retail giant Galeries Lafayette will open a new mall in Shanghai’s financial district by the end of 2018. The company opened a mall in Beijing, seen in November 2014, in 2013 — about 15 years after its first retail location in the country failed. Photo: IC

France’s Galeries Lafayette is set to expand its presence in China with a second mall in Shanghai after its first in Beijing “continued to achieve sales growth targets.”

The area where the new Galeries Lafayette will land has a lot of potential, as the neighboring malls, including Lujiazui IFC and Super Brand Mall, are all top-ranking projects in terms of revenue, said Timothy Chen, East Asia director of commercial real estate group Colliers International.

However, with so many well-known malls in the area, the competition will be fierce, especially because yet another commercial complex, Century Link Tower, is soon set to open, Chen told Caixin.

Galeries Lafayette (China) Ltd. is a joint venture the French retail giant formed in 2010 with the Hong Kong-based apparel maker I.T. Limited so it could return to the Chinese market.

The French company first came to China in 1997 when it opened a mall in Beijing. The project flopped and closed a year later with immense losses. The company decided to return to the city in 2013 as “the Chinese market has changed dramatically over the last decade and seen the emergence of a middle class keen to acquire fashion brands,” the company said at the time.

In its latest earnings report, I.T. said that losses of all joint ventures narrowed nearly 80% to HK$5.5 million ($703,000) for the fiscal year ended Feb. 28. “A principal positive factor was that our joint venture business with Galeries Lafayette has continued to achieve sales growth targets,” I.T. said in the report.