By Wang Xiaoqing and Fran Wang 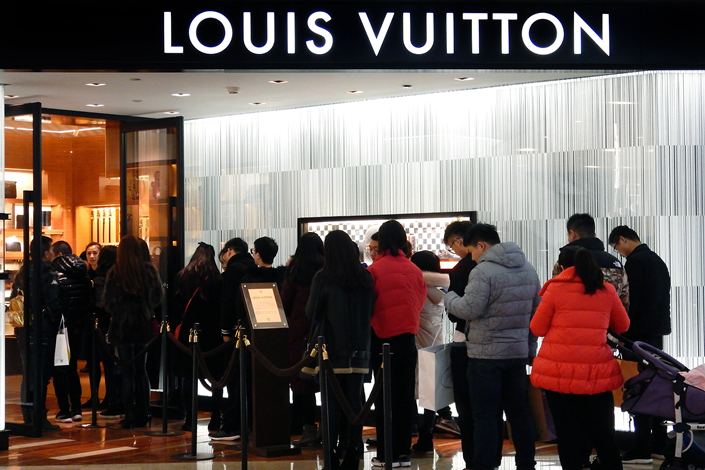 Customers line up waiting to enter a luxury shop in Nanjing, Jiangsu province, on Jan 31. A new report says that the luxury market in China is showing signs of a recovery. Photo: Visual China

(Beijing) — After getting battered by China’s anti-corruption campaign and slowing economic growth, the country’s luxury market is showing signs of a recovery, bolstered mainly by narrowing domestic and overseas price differentials and the way high-end brands have embraced e-commerce.

Chinese consumer spending on personal luxury goods rebounded for the first time in three years in 2016, with a gain of 4% at constant exchange rates to 17 billion euros ($18 billion), global business consulting firm Bain & Co. estimated in a December report.

The market slid by 2% in 2015 and 1% in 2014 as Beijing’s anti-graft campaign and decelerated economic growth in China put the brakes on a spending spree by the country’s nouveau riche, the company said.

“Longer term, China remains an engine of growth for luxury goods as the country’s middle class continues to grow in size and purchasing power,” the report said.

Prices in China are often set at a premium due to spiking Chinese tariffs, exchange-rate volatilities and the inconsistent global pricing strategies of luxury houses.

The yawning differentials, which can be as much as 100%, have driven value-seeking consumers to shop abroad or purchase through agents based in foreign countries — so-called “surrogate buyers.”

But the appeal of foreign bargains has lost some luster since luxury companies, led by French fashion icon Chanel SA, cut prices in China starting in the spring of 2015 with an aim to boost local demand and quell the gray market in surrogate buying, which the brands fear could be a breeding ground for counterfeit goods.

Concerns over terrorist attacks and the weakening of the yuan also deterred many Chinese shoppers from taking the trek to exploit lower prices in Europe and other regions, luxury companies and analysts have said.

“Mainland China is increasingly outperforming the market as Chinese consumption at home increases,” Bain & Co. said in a separate report in October.

Many brands have reported strong expansion or improvement in their China performance last year.

Even Prada, which suffered a 9% loss overall, noted that China returned to growth from the third quarter “with a strong, accelerating trend,” according to the Italian firm’s announcement of preliminary sales figures for last year.

Chinese consumers would prefer to buy locally for better access to after-sale services as long as the spread between onshore and offshore prices was acceptable, analysts said. They often have to renounce the right to return or exchange their purchases from China if the goods were bought abroad. For products like watches, owners may even be required to make a supplementary tax payment when they send them to the foreign manufacturer or distributor for repair.

More and more luxury houses, especially long-standing brands such as Chanel, seemed to have joined the chorus of “price harmonization,” according to findings by New York-based digital marketing research firm L2.

A survey of 29 luxury brands conducted last month by the company showed that 45% of the firms, all of them higher-end labels like Chanel, kept prices on their China website at no more than 15% above those on their U.S. site. Only 29% of 35 brands in a similar poll in May had a gap that small.

“Although surrogate purchases are just like putting money into another pocket for the brands, the unscrupulous grey market has brought with it (opportunities for) a lot of fake products, which have made it difficult for us to control customer service and manage brand image,” said an executive with a French luxury company who asked not to be named.

The gray market, such as surrogate buyers, accounted for 38% of China’s total domestic luxury market in 2015, according to L2.

The government has also stepped up its crackdown on overseas buying agents over the past year, including raising the personal postal-articles tax and letting more duty-free shops set up, to encourage local spending.

Many labels have long delayed jumping on the e-commerce train, which was stereotyped as a business model for mass consumption goods and a hotbed for counterfeiting scams.

But more and more companies are seeking to leverage digital to reach out to young people and consumers in smaller cities to boost growth.

Although accounting for just 5% of the Chinese domestic luxury market, online luxury sales grew 20% in 2015, a growth that surpassed the overall gains by nearly three times, L2 said in a report in May.

“Everybody was driven nuts in the past two to three years by the internet,” said an employee of a communications agency for luxury brands who asked to remain anonymous. “A client I served for many years had been determined to preserve its vintage style. But now it just cannot stay calm in WeChat groups and constantly gets antsy by its rivals’ new online tactics.”

China’s second- and third-tier cities, where chic labels have few costly brick-and-mortar shops or distributors, are the new growth engine for the companies in the digital era.

Beijing, Shanghai and the southwestern metropolis of Chengdu ranked as the top three in 2016 in terms of the total number of luxury goods consumers and orders. But far-flung places such as Ili Kazakh autonomous prefecture and Wujiaqu city in the Xinjiang region had the highest per capita frequency of purchases, a report by Chinese high-end e-commerce company Secoo showed.

Italian luxury-car manufacturer Maserati SpA opened its official store on Tmall last year and received 433 orders for their vehicles by early February. Eighty-seven percent of the orders were placed via cellphones, with the majority of those sent in from areas where the company does not have any authorized distributors, according to the firm.

But the lack of physical experience is a weak link for luxury e-commerce. It remains a problem for the brands to convince consumers to splash out a fortune to buy a product online without enjoying the premium services at brick-and-mortar stores.

Customized courier services may solve part of the problem, and luxury houses have already tied up with international delivery companies such as FedEx and DHL.

Some brands have launched more entry-level products online in China, whose prices are lower as the raw materials are cheaper.

“Luxury brands are relatively conservative. Their strategies are not as flexible and changeable as fast-moving consumer goods (producers) because they want to defend their genes. But in the meantime, they have to respond to market changes,” said an industry insider who asked for anonymity.

Claudia D’Arpizio, a Bain partner in Milan, anticipated the world’s personal luxury market will grow at a compound annual rate of 3% to 4% from this year to up to 285 billion euros by 2020, but cautioned that it will not be an easy road.

“Luxury brands need to adjust their expectations and their strategies as we enter an era in which growth is no longer a given,” she said in Bain’s October report.

“We’re now on a level playing field. Brands that adapt their business and take an omni-channel, customer-centric approach will rise to the top. Those that lag behind are sure to lose market share.”