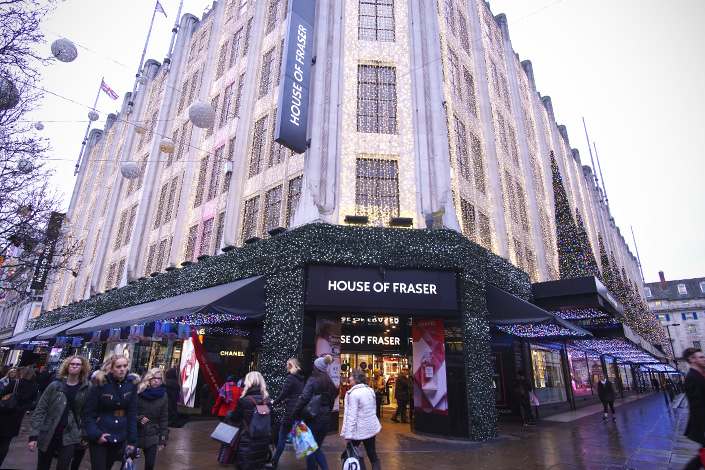 (Beijing) — British retail giant House of Fraser unveiled its first store in China on Wednesday, marking the start of its expansion into the world's fastest-growing retail market.

The store, located in Nanjing, the capital of the eastern province of Jiangsu, brings the total number of House of Fraser stores worldwide to 61.

Sanpower, which also acquired American specialty retailer Brookstone in 2014, will use some of Brookstone's resources to support the new venture, according to Kong Jun, CEO of House of Fraser's China operations. Brookstone opened its first store in China earlier this year.

The opening of the new House of Fraser store comes as its Western peers, including Marks & Spencer PLC and Tesco PLC, are leaving the market after failing to appeal to local tastes and struggling to compete with online retailers.

Nearly 85% of all listed department store operators in China saw their revenue decline in the first quarter of the year, according to retail information provider LinkShop.

In a bid to buck this trend, the new House of Fraser store will combine offline business with online services, Kong said.

However, consulting firm iResearch predicts that the sector will secure annual growth of only 16% in 2018, far less than the 70% gain seen in 2011.

E-commerce companies, on the other hand, have started to roll out offline services in a bid to improve user experience and reduce the proliferation of fake goods circulating online.

The future of China's offline retail sector is looking reasonably positive. Last month, the State Council, China's cabinet, issued guidelines supporting the sector, and at the same time, the consumer price index is expected to continue to see a moderate improvement, said Xu Wen, a retail analyst with Sinolink Securities.