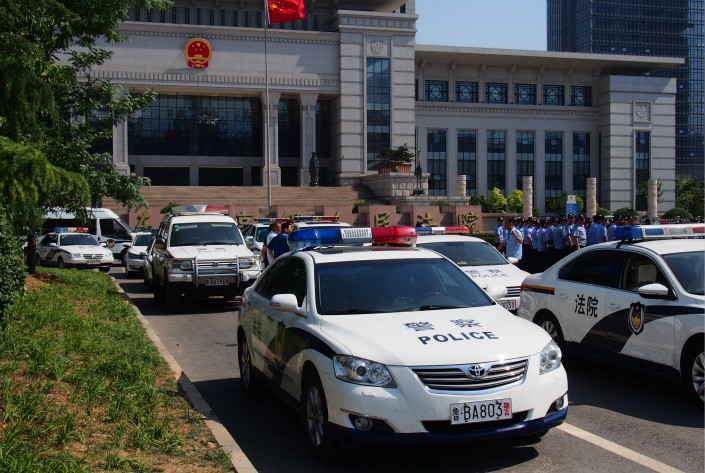 There was a heavy police presence around the Shandong High People's Court on May 27 ahead of a hearing for Yu Huan, who had been earlier sentenced to life in prison for stabbing Wu Xuezhan's employee. Yu's sentence was cut to five years behind bars. Photo: VCG

A loan shark linked to a deadly altercation between his employees and a debtor’s son has been sentenced to 25 years in prison for gang-related activities.

Wu Xuezhan, who operated an investment company in Shandong province, was convicted of gang crimes, molestation of women, unlawful imprisonment and coercive business transactions, by a district court in the Shandong city of Liaocheng.

Fourteen others, including his employees and business partners, were sentenced to two to 20 years in prison for similar offenses, according to verdicts released Friday by Liaocheng’s Dongchangfu District People’s Court.

The ruling Communist Party has made the fight against organized gangs a priority. In January, the central authorities launched a three-year campaign aimed at weeding out organized gangs and “bullies” in business operations.

Wu and the other gang members were charged by prosecutors with activities relating to loan sharking, bullying other business owners, operating illicit gas stations, and building residential homes without licenses, court papers show.

When a group of men came to Su’s automotive brake-pad factory and harassed her and her son for hours on end, the son, Yu Huan, fatally stabbed one of the men and injured another three. The police had been called before the stabbing, but officers reportedly left the scene a few minutes after arriving.

Yu, 22, was sentenced last year to life in prison for causing grievous bodily harm, triggering a nationwide outcry, as many saw his actions as justified defense of himself and his mother. His sentencing was commuted to five years in prison and later classified as “excessive force in self-defense."

Ringleader Wu was arrested along with 14 others in March 2017 and went on trial at the district court in Liaocheng in April.

The court did not say if they pleaded guilty or if they planned to appeal.