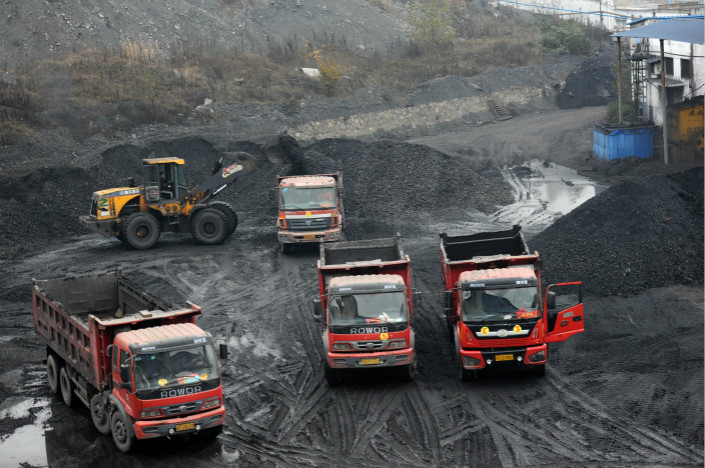 China is mulling a ban on transporting coal, ore and steel by road in several regions, forcing a shift to rail in an attempt to tackle the country’s smog problem.

The Ministry of Ecology and Environment has been considering a rule that coal must be transported on the country’s mostly electrified rail network by the end of September, banning the use of diesel-fueled trucks to make shipments, Caixin has learned from sources close to the matter.

The upcoming policy change is expected to bring about a significant chain reaction affecting not only truckers, but also coal mines, port operators and the railway system. However, obstacles such as the high cost of rail transport and that fact that the rail network doesn’t reach many smaller traders and manufacturers may hinder the reform.

The areas covered by the proposed rule would include eastern China’s Shandong province and the Yangtze River Delta, including Zhejiang and Jiangsu provinces, as well as Shanghai.

In addition, the ministry has also been planning to enforce mandatory rail transportation for other commodities — such as ore, steel and coke — by the end of next year in areas including industrial areas such as Beijing, Tianjin and Hebei province in northern China and the Yangtze River Delta, sources said.

The environmental authorities have long maintained that transporting freight by road is a major contributor to air pollution in China. Emissions from road transport are more than 10 times greater than those from the railway network, according to a March report by Liu Bingjiang, a ministry official who oversees air pollution.

Local governments in Tianjin, Hebei and parts of Shandong started to ban trucks from transporting coal last year and some progress has been achieved.

An unnamed official from the environment ministry said that after the ban was imposed in October, the daily number of diesel trucks depositing freight at Tianjin’s ports dropped by 10,000 on average and the environment “has significantly improved.”

However the shift from truck to rail transport for ore and steel might be harder to realize.

The vast majority of ore is transported by road in China. In 2017, only 7% of ferrous ore and no nonferrous ore were transported by rail to ports in Tianjin and the Hebei city of Tangshan, according to a report from the environment ministry obtained by Caixin.

Apart from a limited number of large steelmakers, many steel plants and ore buyers do not have convenient access to the rail network, an employee from the company that manages the Tianjin Port told Caixin.

A logistics company executive who often works with northern China ports said ore traders do not like to use rail transport, as they see it as costly and inefficient. He said that another reason is that the rail system measures goods by a different method than that used by trucking firms, which can lead to sometimes-costly errors in how products are weighed.

It is impractical to transport many steel products by train, a person working at a port told Caixin. They explained that, unlike coal and ore, which mostly come in the form of loose lumps, steel products vary in size and shape and are difficult to load and unload. This means rail operators are reluctant to deal with the hassle of providing cars for steel goods.

An employee of China Railway Corp., the national rail operator, said that it is working on getting its local subsidiaries prepared for an increase in ore, steel and coke shipments.

An official from the Ministry of Transport told Caixin that it has started research into how to implement reform, such as the feasibility of building new railways as well as what effect the ban will have on trucking companies and their drivers.