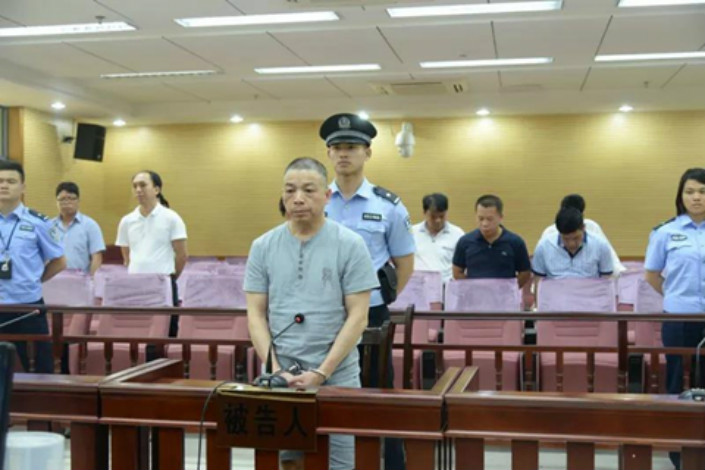 An education official seen last year in photos that went viral of a banquet serving an endangered species has been sentenced to over 10 years in prison for unrelated corruption charges.

Li Ning gained minor infamy last year when photos, from a 2015 banquet, surfaced showing him preparing to feast on a pangolin, a highly trafficked mammal also known as a “scaly anteater.”

Li, an official in the southern autonomous region of Guangxi in charge of helping universities connect with Chinese communities abroad, stood trial Wednesday over corruption charges at a court in the region’s capital of Nanning, according to a statement from the Guangxi High People’s Court.

His conviction was linked to more than 4 million yuan ($628,000) he allegedly took from six publishers to recommend their textbooks to schools in Guangxi from 2011 to 2013, when he headed the curriculum and textbook unit under the regional education department, court documents show.

Li was arrested in May 2016 for allegedly taking bribes from publishers, but the textbook irregularities were not widely known until last year, when Guangxi anti-corruption authorities acknowledged that he was the only official in the viral photos.

It is not known who initially posted the photos, which began to spread on microblog platform Weibo earlier last year and triggered thousands of angry comments from the public and an investigation into potential violations of party discipline.

Pangolin meat has long been considered a delicacy in China. Its hard scales are thought to help detoxify the body, according to traditional Chinese medicine, though there is no scientific evidence to support such claims.

Under Chinese law, poaching and the illegal trade of endangered species are punishable by five to 10 years in prison, but the crimes remain rampant, and have driven the pangolin to the verge of extinction, according to conservation groups.

The Guangxi court did not say if Li’s involvement in the controversial banquet had an impact on his conviction Wednesday.