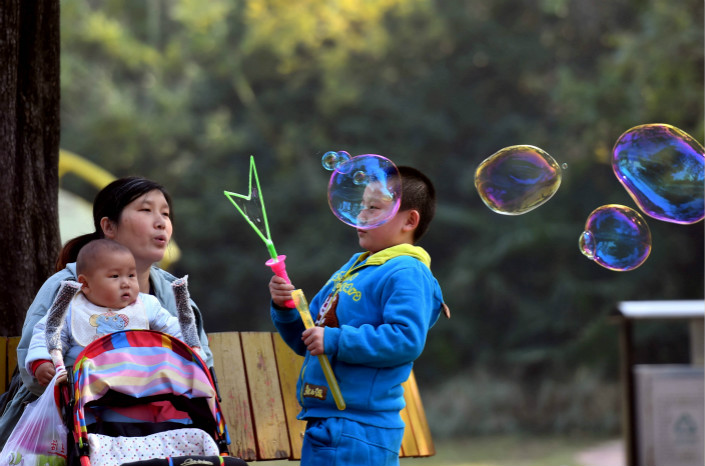 A mother plays with two children at a park in the northern city of Zhengzhou in November 2016. Photo: VCG

* Policy’s end would give couples the right to have as many children as they want for first time since the 1980s.

* Government has incrementally relaxed the policy since 2013 as concern builds about China’s aging population.

The latest development has seen the State Council, China’s cabinet, commission research on the repercussions of ending the decades-old policy, Bloomberg reported this week, citing unnamed sources. That could pave the way for restoring couples’ rights to have as many children as they want, something they haven’t enjoyed since the 1980s.

The birth-limits policy has long been criticized for rampant human rights abuses and has raised concerns in recent years for creating a worker shortage in the world’s second-largest economy. At the same time, people born before the controversial policy are rapidly aging, skewing the nation’s population.

The State Council’s new research on the matter would mark the latest in a growing string of signals of the policy’s imminent removal.

The term “family planning” was dropped from the official name of the national agency that oversees public health in March. The National Health Commission was known as the National Health and Family Planning Commission, but had its name altered as part of an across-the-board overhaul of government agencies earlier this year.

The agency did not respond to a Caixin inquiry on Tuesday about the Bloomberg report of the State Council’s latest action.

In a similar signal in March, Chinese Premier Li Keqiang failed to mention the policy for the third straight year in his annual work report to the country’s top legislature, the National People’s Congress (NPC). A number of top legislators and advisors, including NPC deputy Huang Xihua, also called on the government to end family control measures at that time.

“They’re indications that we’re not far from the day that the family planning policy becomes history,” said James Liang, also known as Liang Jianzhang, a vocal critic of the policy, commenting previously on recent hints of the policy’s demise.

The aging population has been generally rising since China first rolled out its original one-child policy in the late 1970s, stoking concerns that China might fall into a “middle-income trap” that sees it get old before it gets rich.

As China’s fertility rates drop, the ruling Communist Party has spearheaded a push for changes under the current administration of President Xi Jinping. The first major shift came in 2013, when couples were allowed to have a second child if either the husband or wife was an only child.

That policy was expanded two years later allowing all couples to have two children starting in 2016, after the initial relaxation had minimal effect. Many couples, especially in major cities, have said they didn’t want a second child due to high costs and time commitments.

A total of 17.23 million babies were born last year, down from 17.86 million in 2016, according to data released by China’s National Bureau of Statistics. That was far short of a forecast 20 million made by family planning officials when the two-child policy was introduced for all couples at the beginning of 2016.

In a previous commentary published by Caixin, Liang and Huang Wenzheng, a demographer at Johns Hopkins University, called on China to drop all family planning rules due to the nation’s alarmingly low fertility rates.

China’s fertility rate is the lowest in the world, with the average woman in 2015 expected to have just 1.05 births during her lifetime, data published in the China Statistical Yearbook 2016 shows. That is far below a rate of 2.2 that demographers say the country needs to maintain its current population size.