China Teeters on Edge of Becoming an Aged Society 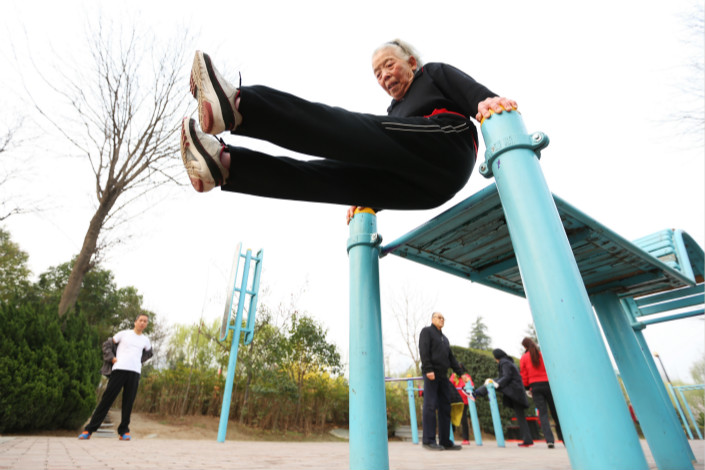 Zhang Huifang, 85, works out at a park in Xi’an in March. A country is considered to have an aged society when the proportion of people over 65 years old reaches 14% of the population. In China, the figure rose to 11.4% in 2017. Photo: Visual China

China is aging rapidly. The number of people over the age of 65 soared to 158.31 million, or 11.4% of the population in 2017, according to data released last week by the National Bureau of Statistics.

Meanwhile, the country’s working-age population — those between the ages of 15 to 64 — has shrunk to just over 1 billion people after peaking in 2013. This has reinforced fears among academics who say China might fall into the so-called “middle-income trap,” or get old before it gets rich. This will hamper the country’s efforts to advance to a developed economy status because its dwindling workforce will have to support more and more elderly people.

According to the World Health Organization, a country is considered to have an aging population when the percentage of people over 65 years old reaches 7% of the population. When this number has surpassed 14%, it has already become an aged society,

China is quickly approaching the benchmark for an aged society. The chart below provides a closer look at the country’s demographic trends from 1982 to 2017.