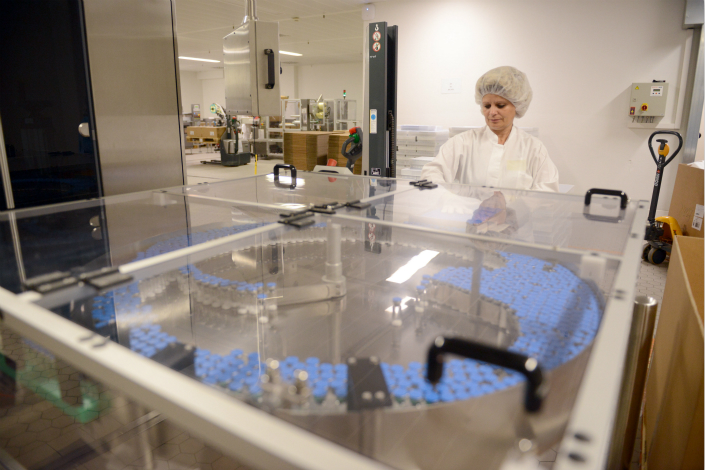 A Takeda employee processes medication at a facility in Singen, Germany. Photo: IC

Takeda has agreed to sell a 51.34% stake in Guangdong Techpool Bio-Pharma Co. Ltd. for $280 million in cash to Shanghai Pharmaceutical Holding Co. Ltd. and a fund managed by a subsidiary of Guangzhou Industrial Investment Fund Management Co. Ltd., according to a Takeda statement.

Techpool was formed in 1993 as an innovative medicine-maker whose portfolio included a pancreatitis injection and cerebral infarction drugs. In 2010, it sold a 51.34% stake to Norway’s Nycomed. Takeda got ahold of the stake when it acquired the Norwegian company a year later.

Takeda’s divestiture of Techpool still needs Chinese regulatory approval. Once the deal is complete, Shanghai Pharma will become Techpool’s largest shareholder with a roughly 67% stake, up from the previous 41%.

The deal came just weeks after the Japanese drugmaker agreed to buy Shire for 45.3 billion pounds ($60.9 billion), one of the biggest yet deals in the pharmaceutical industry, as Takeda seeks to expand into the more-profitable European and U.S. markets.

Takeda has taken on a lot of debt in the expansion, but has vowed to reduce it. Its interest-bearing debt stood at nearly 985.7 billion yen ($8.88 billion) at the end of March, up 64% from a year earlier.

The company said that it would cover half of the cost of the Shire transaction with a bridge loan. The loan will raise Takeda’s debt level to between four and five times earnings before interest, Takeda CEO Christophe Weber said during a conference call. But the company aims to reduce it to no more than two times earnings before interest in three to five years, according to a report by the Nikkei Asian Review.

It is likely that Takeda wants Shire because the Japanese company’s drugs have sold much better in the European and North American markets than at home. In the fiscal year that ended March, Takeda’s revenue from prescription drugs rose 15.8% in the U.S. and 13.7% in Europe and Canada, while the figure dropped in Japan, the only market that saw a decline.