China Falls in Step With Beat of Smart Speakers 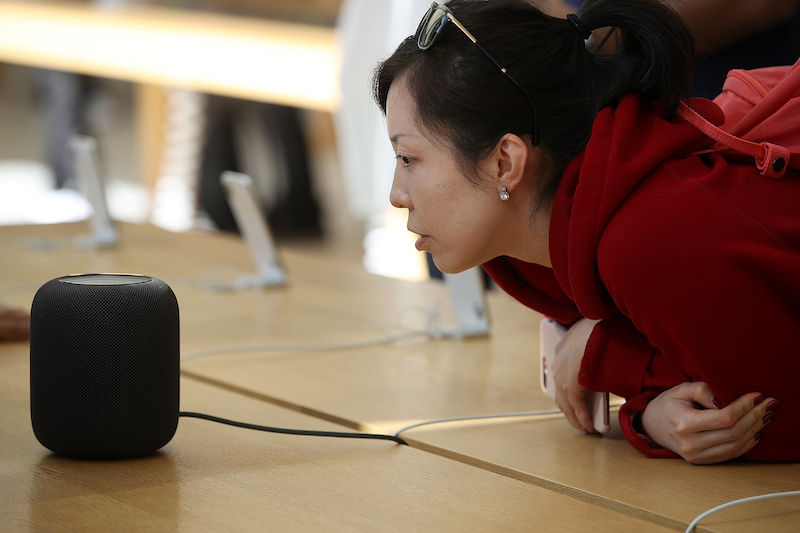 Chinese consumers are falling in step with the upbeat tempo of smart speaker sales, making the country the second-largest market for the artificial intelligence-powered devices behind only the U.S.

In the first three months this year, smart speaker shipments in China totaled 1.8 million units, up almost 55-fold from the same period last year, according to a report by Singapore-based market analyst Canalys.

Globally, smart speaker shipments rose 210% to 9 million units in the first quarter, according to Canalys. For all of this year, Canalys earlier projected that smart speaker sales in China would reach 4.4 million and in the U.S., 38.4 million.

Ignited by the 2014 debut of Amazon’s Echo, the global craze for smart speakers has been heating up. Equipped with voice-based AI systems, the portable speakers respond to users’ verbal orders to play music, read news, report the weather and provide a variety of other services. Analysts expect smart speakers to become a ubiquitous part of daily life and the hub for people to control all kinds of devices from televisions and air conditioners to automobiles by voice command.

Global tech companies have followed Amazon’s lead seeking to carve out a piece of a burgeoning market. Google Inc. in May 2016 released its own Google Home speaker to compete with Echo. In June 2017, Apple Inc. launched its long-anticipated HomePod speaker, shortly after speaker maker Harman Kardon unveiled the Invoke, powered by Microsoft’s Cortana voice-assistant software.

Ru Yi, Alibaba’s AI Lab manager, said at an industry conference this week that AI-powered smart speakers will further extend the boundary of mobile internet applications and provide a wide range of services to users.

Chinese tech companies have spent heavily in a smart speaker price war to lure users. In a special sales event in October, Alibaba offered coupons to selected buyers of its voice-controlled Tmall Genie, an Echo-like smart speaker that can help users place orders with Alibaba’s online stores. Prices of the device were slashed to as low as 99 yuan ($15.50) from 499 yuan, compared with a cost of more than $100 for an Echo device.

During the 10-day sales event, Alibaba said it received orders for 800,000 Tmall Genies.

In the first quarter this year, Alibaba shipped 1.1 million smart speakers, the most in China and third-largest globally, according to Canalys data.

“Market dynamics in China can change very quickly,” said Canalys Research analyst Lucio Chen. Traditional hardware vendors have been cautious at the beginning, but with deep-pocketed players ramping up investment, “the market will be ignited in no time,” said Chen.

Worldwide, Google Home for the first time surpassed Echo to become the most popular smart speaker with 3.2 million shipments in the first quarter. Both companies have reported faster growth in markets outside the U.S. Neither Google Home nor Echo has officially launched sales in China.

Market analyst Strategy Analytics predicted last year that the smart speaker market would grow to $5.5 billion by 2022, up from about $1.5 billion this year. By 2022, 33% of families in North America will be equipped with smart speakers, compared with the current 7%.