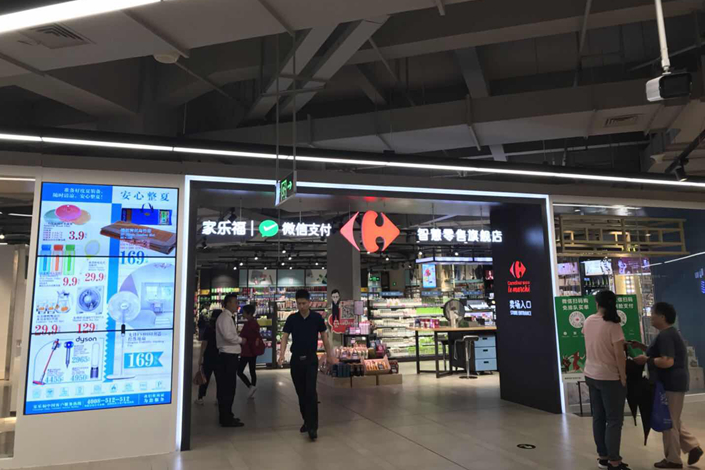 This opening of the high-tech store, the first in the world, marks the beginning of Carrefour’s retrenchment in China after its recent struggles in the hypercompetitive market. The company, which forged a strategic partnership with Tencent this year after considering abandoning the country, now sees the China market as a place to test out new ideas to reinvigorate its business.

The 1-acre store, only half of the size of a normal Carrefour hypermarket, features high-tech functions like facial recognition and cashierless checkout.

With the help of a facial recognition machine at the store’s entrance, shoppers can sign up for a Carrefour membership that they can link to WeChat Pay, a mobile payment function embedded in Tencent’s WeChat app.

Once that is done, customers can choose to avoid waiting in line for a cashier by scanning their purchases themselves on WeChat. Paying then requires nothing more than a face scan. For the less-technically savvy customers, cashiers will still be on-hand to ring up purchases the old-fashioned way.

The opening of the Le Marche store in Shanghai comes at a time when Carrefour has hit a wall in the highly competitive China market. In the first quarter, same-store sales in China fell 6.6%, the worst performance in any of the company’s markets.

Carrefour, which had been considering the sale of its China unit, ended up striking a strategic partnership with Tencent in January and securing investment from Tencent and local supermarket chain Yonghui.

Le Marche — French for “the market” — is the first fruit of the partnership. Earlier this year, Tencent helped Carrefour launch an in-app application on WeChat to enhance the visibility of the retailer’s online promotions and coupons.

Garnier called the China market a retail laboratory and said that the company has and will try more-innovative models in the country.

The Le Marche store features an in-house cooking services of sorts in which customers can pick out food and have it prepared at the store. Hema supermarket, an online-to-offline chain incubated by Tencent rival Alibaba Group Holding Ltd., is known for similar services.

Garnier said that Carrefour plans to launch more small-format grocery stores. Besides the new store, the company has launched convenience stores under the brand Easy.

Sales growth of the small store has been better than expected, he said, and has a promising future.

Other retail giants that have traditionally operated supermarkets have also tried out smaller stores. In April, Walmart Inc. from the U.S. launched a convenience store in Shenzhen.

Chinese retailer Suning Group, which had 23 smaller stores at the end of 2017, hopes to open 1,500 new locations this year. This year, it acquired Spanish retailers Dia’s China stores to aid in the expansion.