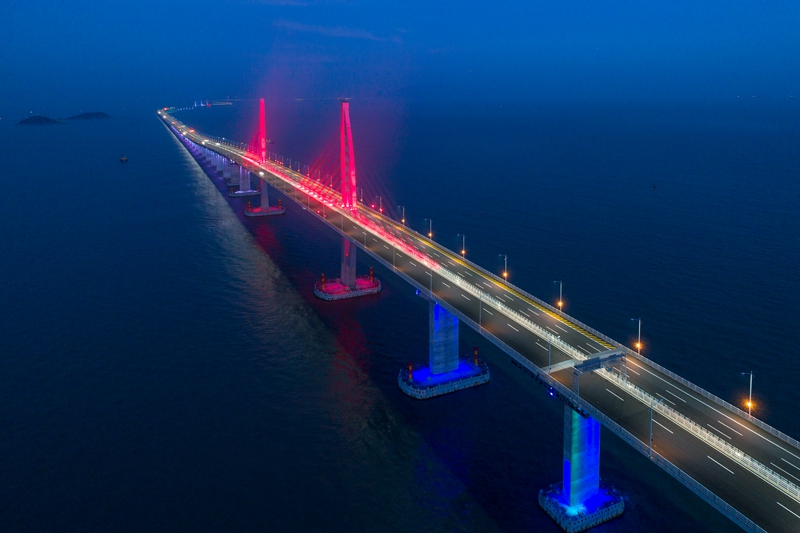 The 55-kilometer Hong Kong-Zhuhai-Macau Bridge that is set to be open this year. Photo: VCG

The Pearl River Delta has been a shining example of China’s economic success over the past four decades of reform and opening-up. Now, leaders want the region to continue to glow with an ambitious plan to make it even bigger and stronger.

A central government plan to develop China’s Greater Bay Area is set to be released as early as the end of May. The plan will transform the Pearl River Delta into a world-class city cluster by integrating neighboring Hong Kong and Macau — the two special administrative regions that were colonies of Britain and Portugal respectively until two decades ago.

Last week, Vice Premier Han Zheng, who is in charge of the region’s development as well as Hong Kong and Macau affairs, told reporters that the bay area development strategy has been “personally planned, mapped out and promoted” by President Xi Jinping, underscoring the importance to the project.

The Pearl River Delta region is crucial to China’s economy. The triangle of land on China’s southern fringe has been the nation’s most dynamic economic center, evolving from the world’s factory floor to a rising high-tech hub. Consisting of nine cities in Guangdong province, notably Shenzhen and Guangzhou, the region accounts for less than 1% of China’s territory and 4% of its population but generates nearly 10% of national gross domestic product (GDP).

With a population of 58 million — greater than those of Canada or Australia — the Pearl River Delta region in 2015 was named the world’s biggest megacity by the World Bank, surpassing Tokyo. Fan Gang, director of China Development Institute, in April predicted that by 2050, population in the Greater Bay Area will roughly double to 120 million to 140 million.

The central government envisages even greater potential for the region. During this year’s national legislative session in March, Beijing unveiled a strategy to develop the Guangdong-Hong Kong-Macau Greater Bay Area to enhance connectivity, capital and talent flow and expand regional cooperation and growth.

Waiting for the road map from the central government, local officials have begun preparations as the market heats up.

But it wasn’t until 2015 that the idea of a Greater Bay Area started appearing in central government documents. The country’s 13th Five-Year Plan, released in early 2016 and running through 2020, pledged efforts to promote Greater Bay Area cooperation.

The idea drew broader attention in 2017 when it was written into the annual government work report delivered by Premier Li Keqiang to the congress. In July, the governments of Guangdong, Hong Kong and Macau signed a framework agreement to develop the Greater Bay Area.

“The Greater Bay Area is a natural result after 40 years reform and economic cooperation between Hong Kong, Macau and the mainland,” said Chen Guanghan, an economics professor at Sun Yat-sen University in Guangzhou.

The central government hopes a more-integrated bay area will create greater economic value with synergies across the region.

Cities in the region have established their own unique strengths. Hong Kong is known as a global financial hub, Macau is advanced in entertainment and tourism, while Guangzhou and Shenzhen both aim to expand the services and high-tech sectors. Other cities in the region are focused on advanced manufacturing, according to a report by Citic Securities.

“The essence of the Greater Bay Area (initiative) is to complement the strengths of different cities,” said Ji Yanxun, China research head of real estate consultancy Knight Frank LLP. “It is crucial to work out a regional plan that can boost economic activities and mobility of people.”

Guo Wanda, deputy director of Chinese Association of Hong Kong & Macao Studies, warned that the regional development plan should provide a balanced strategy to allow different cities to thrive rather than concentrating resources on selected cities by administrative orders.

Economic integration will be supported by physical interconnection. Massive infrastructure projects to enhance regional connectivity are already underway. The iconic project is the 55-kilometer (34-mile) Hong Kong-Zhuhai-Macau Bridge, the world’s longest road bridge, that is set to be open this year. The new bridge will halve the travel time between Hong Kong and Zhuhai.

A 140-kilometer high-speed rail line linking Guangzhou, Shenzhen and Hong Kong is also expected to start operation this year. It will shorten travel time between Guangzhou and Hong Kong to 48 minutes from the current two hours.

The new bridge and railway line will enhance mobility between cities in the bay area, potentially relieving some of Hong Kong’s land shortage problems by allowing more Hong Kong workers who can’t afford the city’s pricey housing to live outside the city and commute, according to a recent report by UBS

Connectivity projects under construction also include tunnels, ferry lines and highway networks. In May 2017, the Guangdong government proposed 1.46 trillion yuan of transportation projects. Property services company DTZ predicted that by 2020, intercity railway lines in the bay area will expand from the current 3,200 kilometers to 4,400 kilometers, while highways will double to 8,800 kilometers.

But there are challenges beyond the physical integration. The bay area involves the special administrative regions of Hong Kong and Macau, where different systems and customs rules apply, posing hurdles to the mobility of people and goods. Guangdong Governor Ma Xingrui said in April at the Boao Forum for Asia Annual Conference that the provincial government was drafting plans to deal with the issues to streamline integration of the bay area, such as issuing special permits for workers and vehicles to cross the borders.

Although the key development plan is still pending, investors are already going after opportunities in the bay area, pushing up the property market.

“Zhuhai’s property market has attract many (speculative) investors,” said an investment bank analyst. The city’s land prices have surged as more than 50 developers have flooded into the city, said another source from a Zhuhai-based property company.

Housing prices in most cities in the bay area jumped more than 50% between 2015 and 2017 as the Greater Bay Area initiative took shape and infrastructure construction began, according to local government statistics. The price increases have spurred authorities in cities like Guangzhou, Shenzhen, Foshan and Zhongshan to impose measures to rein in speculative deals.

But analysts said the impetus behind soaring housing prices remains, especially in bigger cities as demand grows with economic expansion. To serve local development, authorities in the bay area have stepped up efforts to attract talent to the local labor force.

A 2016 Shenzhen government report estimated that between 2016 and 2020, the city will have demand for 1.8 million new homes while newly built apartments will total only 650,000 during the period.

Xiao said the growing demand will test the governments’ ability to use market-oriented measures to guide the housing market. Simply imposing restrictions will only increase risks, Xiao said.