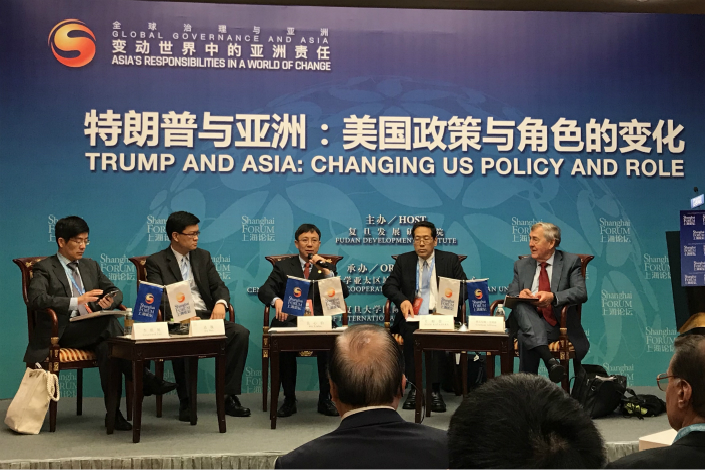 Ahead of the U.S.-North Korea summit, experts debate the changing Asia policy of the U.S. under the Trump administration at the Shanghai Forum on Saturday. Photo: Leng Cheng/Caixin

Experts attending a Shanghai forum said that the planned U.S.-North Korea summit will inevitably occur, although disagreements on a detailed road map for denuclearization and the removal of U.S. forces from the Korean Peninsula may prevent any major deal in the near future.

The diplomatic situation was discussed by university scholars and defense officials from China, the U.S., South Korea and Japan during Shanghai Forum 2018, which kicked off Saturday.

The unprecedented planned summit between U.S. President Donald Trump and North Korean leader Kim Jong Un has captured the world’s attention with its recent diplomatic ups and downs. Trump apparently scrapped the June 12 Singapore summit on May 24, citing “tremendous anger and open hostility” in Pyongyang’s recent statement. However, the talks were later salvaged, with Trump reversing his position and dispatching a team to North Korea to prepare for the summit.

Graham Allison, former professor at the Belfer Center for Science and International Affairs at Harvard University, told the session that even if the summit doesn’t happen on June 12, it will definitely be held this summer. He suggests “taking Trump seriously but not literally,” as some of his statements are just political tactics based on his own philosophy.

The pair will likely reach an agreement about nuclear weapons on the Korean Peninsula, but are unlikely to deal with human rights abuses in North Korea, Allison added.

Geunwook Lee, professor at the Department of Political Science at Seoul’s Sogang University, however, was less optimistic about the notion that an agreement on denuclearization will result from the Trump-Kim summit. Lee’s main concern was Pyongyang’s trustworthiness and the two sides’ differing interpretations of what “denuclearization” means.

North Korea and the U.S. also have different views on the “peace agenda,” Lee added. North Korea believes that only a peace treaty involving the withdrawal of U.S. troops from the peninsula would be effective, while the South Koreans see the signing of a document as sufficient in itself.

Lee suggested that both the North Korean military and the U.S. forces in South Korea should see a 20% to 30% reduction and that the two sides should build trust over the course of more interactions.

Da Wei, assistant president of Beijing’s University of International Relations, argues that the Trump administration lacks credibility and changes policies too frequently, which makes it difficult to reach a consensus.

“Geopolitical competition between China and the U.S. exists, but attention should be paid to the environment of competition, which is an open system,” Da argued.

Strategic competition and trade friction between China and the U.S. engender unpredictability in all of northeast Asia, said Eiichi Katahara, director of International Exchange and Libraries at the National Institute for Defense Studies under the Japanese Ministry of Defense.

The situation concerns Japan as it challenges the sustainable development of Japan-US relations, and the country hopes the likelihood of a Sino-U.S. conflict can be reduced. Katahara proposed that Japan should work with China in persuading the U.S. to change its international trade policy, while establishing multilateral crisis management mechanisms in the security domain.

Despite their different perspectives, all the four experts agreed that the Korean Peninsula could become a flashpoint for Sino-U.S. tensions and all parties should work hard together to prevent the occurrence of open conflict.