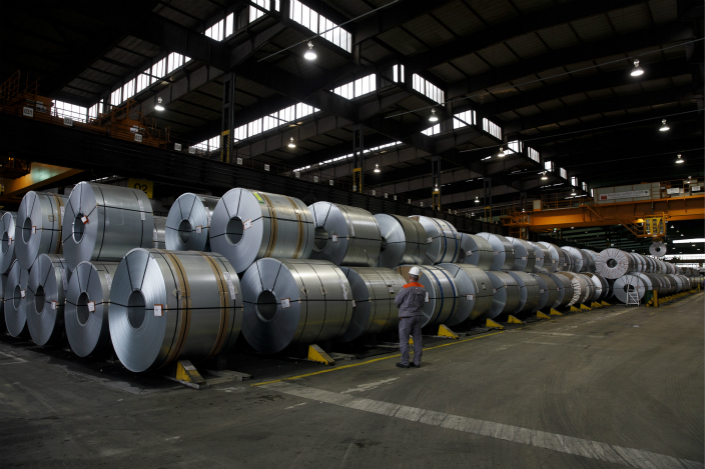 A worker stands beside rolls of steel before they are shipped from the Salzgitter AG plant in Salzgitter, Germany on March 22. Photo: VCG

International exchanges and free trade are under duress all over the world. China and the United States have been dangerously close to a trade war this spring and tensions will remain high in the future. Europe is waiting for a decision on steel and aluminum tariffs. Major free-trade agreements (such as NAFTA) are under threat of renegotiation, have been blocked (the Transatlantic Free Trade Agreement, or TAFTA), or abandoned by the U.S. (the Trans-Pacific Partnership, or TPP). Never before has the risk of commercial confrontation been higher and more erratic that the one the world is witnessing today.

However, in some respect, this commercial conflict is the visible part of a deeper and more complex phenomenon that has been brilliantly described by Graham Allison in the concept of the “Thucydides trap” he designed in a recent book. The fact is that we are at a political, economic and cultural crossroads where the declining power of the United States is meeting the rising influence of China. As shown by Graham Allison, history is full of similar examples of confrontations between rising and declining powers competing for leadership. This is the major challenge for the century to come.

Whatever the final conclusion of the U.S. regarding European exemption from tariffs, on June 1, there is a major lesson we have to take away from the current economic divides and tensions: It has become necessary to build up an alternative to unilateralism based on mutual trust, shared prosperity and open dialogue. Today, Europe and China can join hands to guarantee the world’s economic stability.

First of all, this is a matter of growth and economic dynamism as China and Europe share a trade volume of more than $500 billion per year while representing more than a third of global gross domestic product. In the coming decades, I do believe China and Europe are about to become the main engines of international prosperity provided they overcome fears and misunderstandings. It’s all about avoiding the risk of recession implied by economic isolation and commercial sanction.

Second, this is a matter of diplomatic and political stability, given that China and Europe serve common values when they aim at making the world more open, more sustainable and better regulated. Over the last years and months, we have seen China and Europe jointly committed in major global causes: They support green innovation and the fight against climate change as witnessed during the negotiation of the Paris Climate agreement in 2015. Together, they promote dialogue and innovative peace-building in tense areas such as North Korea, Africa and the Middle East. They also advocate for a stronger multilateralism in economic and financial institutions such as the WTO and the IMF.

Third, strengthening the EU-China bonds is also a matter of cultural understanding and mutual confidence. I am convinced that intellectual and academic partnerships between China and Europe, as put forward by the French President Macron during his visit in Beijing in January, will be decisive to build the world of tomorrow and facilitate the treatment of mutual apprehensions. It is my pride, as a professor at the China Europe International Business School, to be part of an institution dedicated to building cultural and economic bridges between our two continents.

In the coming decades, concrete projects will be key to materialize the EU-China partnership and give signs of success on the path of peace and growth. My conviction is that the Belt and Road Initiative is a great opportunity to achieve this goal covering economic, political and cultural aspects. Europe, at one end of the Eurasian continent, is destined to be a key player in this global initiative.

In a time of growing protectionism, the Belt and Road Initiative does offer a unique momentum to restore trust in globalization and stimulate cross-border cooperation with a financial objective of over $1 trillion of investment in strategic sectors like infrastructure, smart cities, transport, energy and artificial intelligence. The Belt and Road consequently provides more than 60 countries across the world with major perspectives in terms of employment, education, health care and integration.

In 2018, we celebrate the 15th anniversary of the China-EU Comprehensive Strategic Partnership. It’s not only an opportunity to look back at what has been accomplished so far. It is also the time to invent new modes of cooperation, in particular in the areas of finance and commerce. We could start with the creation of a structure jointly headed by the European Commission and the Chinese presidency whose main function would be to address economic fears, financial brakes and commercial rules in the frame of the Belt and Road Initiative. This EU-China office for trade and investment would be both a symbolic response to the risk of protectionism and a concrete means to accelerate the bilateral treaty announced in 2014. The time has come to combine innovation and initiative to break the vicious circle of commercial escalation.