By Ye Zhanqi and Bonnie Cao 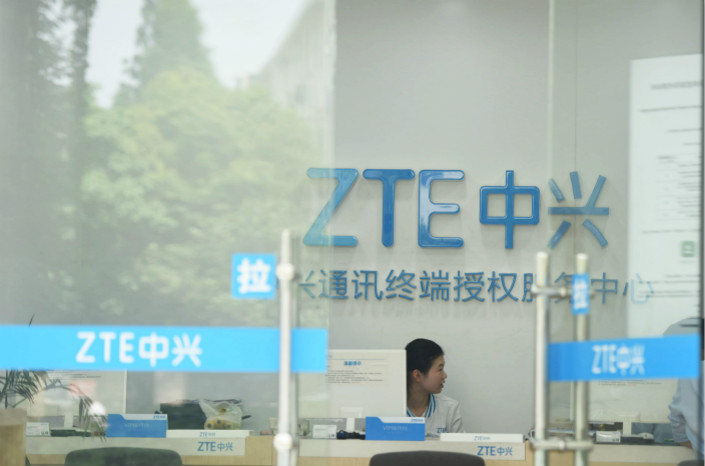 A ZTE Corp. store in Hangzhou, Zhejiang province, on May 14. Photo: IC

ZTE Corp., the Chinese telecom company penalized with a seven-year export ban by the U.S., has replaced one of its most senior executives, a move seen as signaling an effort to seek relief from the crippling sanctions.

Tian Dongfang, 58, a ZTE non-executive director, assumed the post of party secretary for two weeks replacing Fan Qingfeng, according to people familiar with the matter. The appointment was made by the city government of Shenzhen, where ZTE is based. Communist Party secretary is a role often considered to hold ultimate responsibility in state-backed Chinese companies.

China is seeking a reprieve from a seven-year ban that the U.S. Commerce Department imposed in April barring ZTE from doing business with American companies after ZTE breached an agreement over illegal sales to Iran. ZTE’s second- and third-largest shareholders are state-owned enterprises that jointly hold a 48.5% stake. The largest shareholder with 49% represents company management.

ZTE’s management reshuffle came after President Donald Trump said last week the U.S. would allow ZTE to resume business provided it pay a $1.3 billion fine and change its management and board. There’s no direct indication whether Tian’s appointment is related to Trump’s statement. In Washington, opinions are divided on ZTE. Many U.S. lawmakers urged Trump not to soften the penalty.

Tian’s predecessor Fan, an executive president since 2008, was also the former director of the company’s Compliance Management Committee. In the recent round of criticism of ZTE, compliance has been a key issue.

Before ZTE, Tian worked more than 30 years in a think tank under the China Aerospace Science and Technology Corp., one of the state shareholders of ZTE.

The two veteran executives have worked at the company for about 20 years, but the sidelining is not an effort to appease American demands, the people said.

The fate of ZTE, now at the center of China’s trade dispute with the U.S., largely depends on trade negotiations. U.S. Commerce Secretary Wilbur Ross will lead a delegation to Beijing for a three-day visit starting Saturday. It’s expected that ZTE and technology issues will be on the agenda.

ZTE, China’s second-biggest telecom equipment maker, is already suffering. The company’s operations including production and sales have almost completely halted, according to sources.

“It is like the heart has stopped beating, but the blood vessels are still bleeding,” said a person close to ZTE. ZTE will not be able to resume operations if the U.S. ban is not lifted within two months, the person predicted.

ZTE, however, is prepared for various possible scenarios, including a further management reshuffle and a reorganization plan for immediately resuming production if the U.S. sanctions are relaxed, sources said.