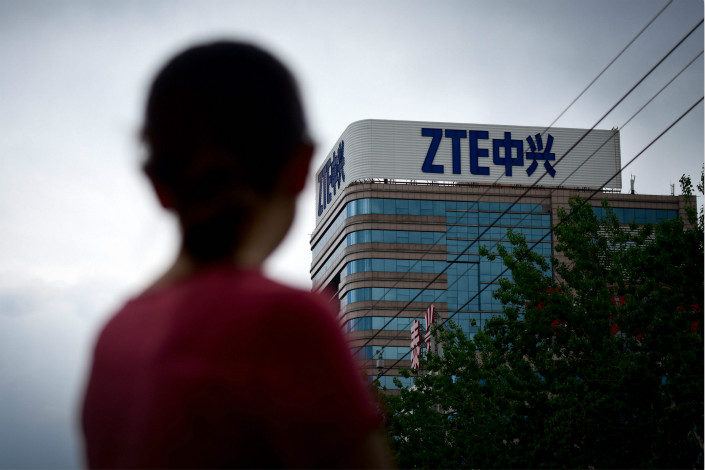 “Price-wise, when (shares) are suspended all bets are off,” said one analyst. Photo: VCG

*Swiss brokerage UBS purchased 2.65 million ZTE shares at an average cost of $2 per share, boosting its stake in the company to 5.32% from a previous 4.97%

(Beijing) — A large shareholder of embattled telecoms equipment-maker ZTE Corp. sold a big block of shares at a nearly 40% discount to their last trading price, according to a new stock exchange filing, providing an indication of where the stock may be valued when trading resumes.

Dually-listed ZTE’s shares have been suspended from trading in Hong Kong and Shenzhen since April 17, after Washington announced that the company will be cut off from its U.S. suppliers for seven years as punishment for selling America-made products to Iran. Since then, ZTE has been scrambling to convince Washington why it should not be subject to such sanctions, which it has said could threaten its existence.

According to a filing to the Hong Kong Stock Exchange dated on Wednesday, Swiss brokerage UBS purchased 2.65 million ZTE shares at an average cost of HK$15.7486 ($2.00) per share, boosting its stake in the company to 5.32% from a previous 4.97%. That price would translate to a total transaction value of about HK$42 million, a relatively modest amount compared with ZTE’s market value of HK$127 billion before the trading suspension.

The selling price was about 38% below ZTE’s last trading price of HK$25.60 before the trading suspension was announced on April 17. The trade occurred on April 26, or several days after ZTE revealed it was in talks with Washington in an effort to convince it not to impose the sanctions. In its latest announcement earlier this week, ZTE said its shares will remain suspended pending, among other things, release of an assessment of the impact of the sanctions on its business.

UBS bought the heavily discounted ZTE shares on behalf of a number of funds managed by the company. The sale appears to have taken place via over-the-counter trading in New York, where roughly 2.7 million ZTE shares traded hands on April 26 and April 27, according to Yahoo Finance. The last of those trades saw ZTE shares end at $4.57 on April 27, versus a level of $6.40 in the days before the Hong Kong and Shenzhen suspension.

“Pricewise, when things are suspended, all bets are off,” said one analyst, who declined to be named due to the sensitivity of the situation. “If you want liquidity you’re going to have to pay for it in terms of coming down on the asking price. You could say there was probably a very motivated seller.”