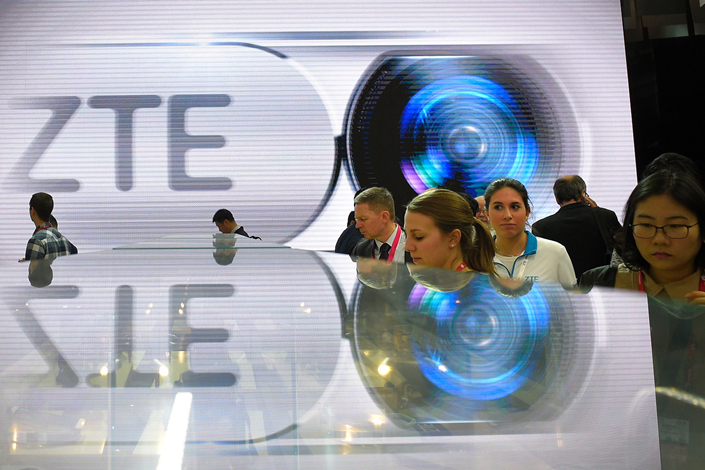 In March 2017, ZTE agreed to pay as much as $1.2 billion in fines over allegations that it illegally sold U.S.-made equipment to Iran and North Korea. Above: ZTE Corp.'s stand at the Mobile World Congress in Barcelona on Feb. 23, 2016. Photo: VCG

The commerce department said Monday that it imposed a “denial of export privileges” order against ZTE. The department alleged that ZTE made false statements to U.S. officials and violated a previous settlement of criminal and civil charges for making illegal shipments to Iran and North Korea.

The denial of export privileges will block American companies from selling components to Shenzhen-listed ZTE, one of China’s largest telecom equipment makers.

Shares of U.S. optical-component companies plunged following the announcement. Nasdaq-listed Acacia Communications Inc., which gets about a third of its revenue from ZTE, tumbled over 35% in a record decline, according to Bloomberg data. Oclaro Inc., another major supplier of ZTE, lost over 14% in early trading.

In March 2017, ZTE agreed to pay as much as $1.2 billion in fines over allegations that it illegally sold U.S.-made equipment to Iran and North Korea in violation of U.S. sanctions aimed at punishing those countries over nuclear development programs.

In addition to the fines, ZTE agreed to a suspended seven-year denial of export privileges. That penalty was to be activated if ZTE failed to implement a new compliance program and to punish the employees involved or if the company committed additional violations, according to the department.

The commerce department said Monday that ZTE made false statements to its Bureau of Industry and Security (BIS) in 2016 and 2017 during settlement negotiations and the probationary period “related to senior employee disciplinary actions the company said it was taking or had already taken.”

These false statements covered up the fact that ZTE paid full bonuses to employees who had engaged in illegal conduct and failed to issue letters of reprimand, according to the commerce department.

The U.S. ban came on the same day that the U.K.’s cyber security watchdog warned the country’s telecom providers not to use network equipment or services from ZTE, citing national security risk.