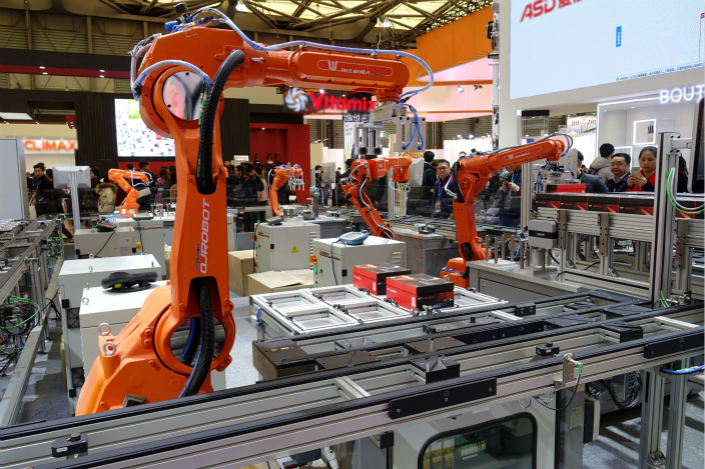 An automated assembly line on display at the China Home Appliances and Consumer Electronics Expo in Shanghai on March 9. Photo: VCG

China has the ability to achieve its goals of upgrading its manufacturing and high-tech industries, though the U.S. could slow things down in the short term, an expert on China’s credit said Tuesday.

“A number of (Chinese) tech companies and innovative industries are partly reliant on goods and services imports from U.S. companies in the short term. If there were increasing hurdles to accessing these technologies, then it would be disruptive,” she said during a meeting on China’s credit outlook in Beijing.

The hurdles will probably slow China’s progress on its “Made In China 2025” strategy, a government plan to upgrade its industrial sector to a high-tech and higher value-added one.

Still, over the long run, China has the financial and technical means to domestically produce many of the technologies it currently imports, she said, though that will require the government to increase investment in research and development to 4% of gross domestic product from the current 2%.

“Over time, there would be a shift from imported technologies, services and goods in tech sector towards more domestic reliance,” she said, adding this is in line with China’s industrial upgrade objective.

Regarding the trade spat between the world’s two largest economies, Diron said the ongoing negotiations will go on for quite some time, probably beyond this year, which will add to the uncertainties over trade in the near future and will be disruptive to both the U.S. and Chinese economies.

For China to meet the U.S. demand to slash its trade surplus by $200 billion in three years, it would have to cut its exports to the U.S. by about 15% per year for the next three years or increase its imports by 25% annually over the same period, according to Diron. Neither scenario will be easy to achieve because they both run counter to the trends of the last five years.

Since April, China and the U.S. have exchanged threats to impose retaliatory tariffs on shipments worth up to $150 billion from one another. The threats have rattled investors and stocks in both countries.

Delegations led by Chinese Vice Premier Liu He and U.S. Commerce Secretary Wilbur Ross met in another round of trade talks in Beijing Saturday and Sunday. There has been no announcement of any deal from those negotiations.

The U.S. also said last week that it will step up scrutiny on Chinese investments in U.S. tech companies and on Chinese purchases of U.S. technologies, as well as tighten restrictions on visas for Chinese students and scholars in areas related to science and technology.

Diron pointed out that a trade war would have a smaller impact on the U.S. economy than on the Chinese economy. In addition, the effects of such a trade war could cascade across Asia because China, which plays a key role in Asia’s supply chain, has been an end-market and export destination for a number of goods shipped from South Korea, Vietnam and Malaysia.