Update: China’s Trade Surplus Narrows, But Not With U.S. 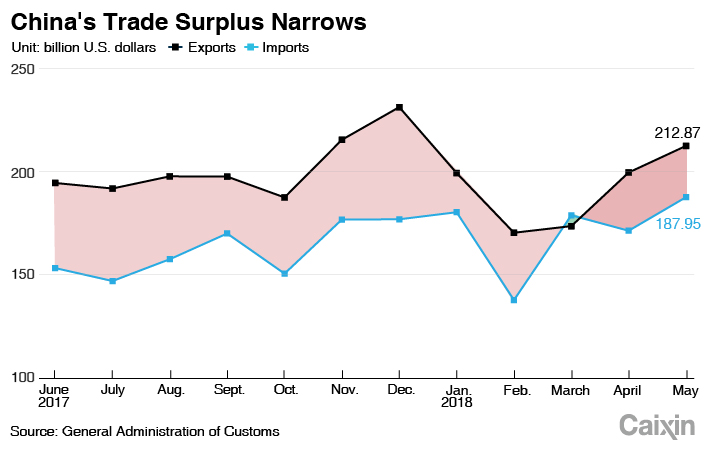 * Exports rose 12.6% in dollar terms from April to May, while imports jumped 26%

* China’s trade surplus with the U.S. further widened to $24.6 billion in May

(Beijing) — China’s trade surplus narrowed in May as both imports and exports grew faster than expected.

China’s exports rose 12.6% in dollar terms in May from a year earlier, beating a Bloomberg News forecast for an 11.1% increase, and unchanged from April’s growth rate, according to Chinese customs data.

China’s imports also exceeded expectations, growing 26% year-on-year in May, beating a forecast for an 18% increase by Bloomberg News and picking up from a 21.5% increase in April.

The trade figures suggest that both domestic and foreign demand remained resilient last month, though it is unlikely the momentum will be sustained, analysts said.

Several Chinese research organizations estimated that export and import growth might taper in May due to a faltering economic recovery in the EU and Japan.

Economists believe that import growth accelerated in part because of price inflation from rising oil prices. China imported 5% more crude in May than in April, during which time the price of imported oil jumped 41%.

Despite the distortion caused by the surge in the price of oil, last month’s surprisingly strong import growth suggests “some of the recent boost to industrial activity from the easing of winter pollution controls may have extended into May,” Julian Evans-Pritchard, senior China economist with Capital Economics, said in a note.

In yuan terms, export growth edged down to 3.2% last month from 3.7% in April. Capital Economics estimated that after adjusting for seasonal distortions and price effects, China’s export volume rose 0.9% month-on-month in May, pointing to an uptick in foreign demand last month, which is also consistent with the improvement in the export orders subindex of the official manufacturing PMI in May.

Despite this, China’s overseas shipments remained a bit weaker than at the start of the year and “a broad downtrend in export growth remains in place” because global growth has passed its peak, Evans-Pritchard said.

China’s trade surplus with the U.S. further widened to $24.6 billion in May. China logged a trade surplus of $22.2 billion with its largest trading partner in April amid the ongoing trade dispute between the world’s two biggest economies, customs data showed.

The two countries have threatened reprisal tariffs on each other’s shipments worth up to $150 billion, which have rattled stocks and investors in both countries.

China has proposed buying U.S. agricultural and energy products worth nearly $70 billion on the condition that Washington drops its tariff threats on Chinese imports, according to an article by the Wall Street Journal.

U.S. President Donald Trump has held discussions with trade advisers on the Chinese offer, according to Reuters. However, it remains unclear now whether it would be enough to avoid a trade war.

Earlier in this week, economists from Moody’s came up with a worst-case trade war scenario. If the U.S. implements a 25% tariff on $150 billion worth of Chinese shipments, then it will drag down China’s export growth rate by 1.65 percentage points, resulting in a 0.3 percentage point decrease in China’s gross domestic product growth rate.

“Even if a trade war is avoided, Chinese trade growth is still likely to edge down over the coming year as the global economy loses momentum,” Evans-Pritchard said.