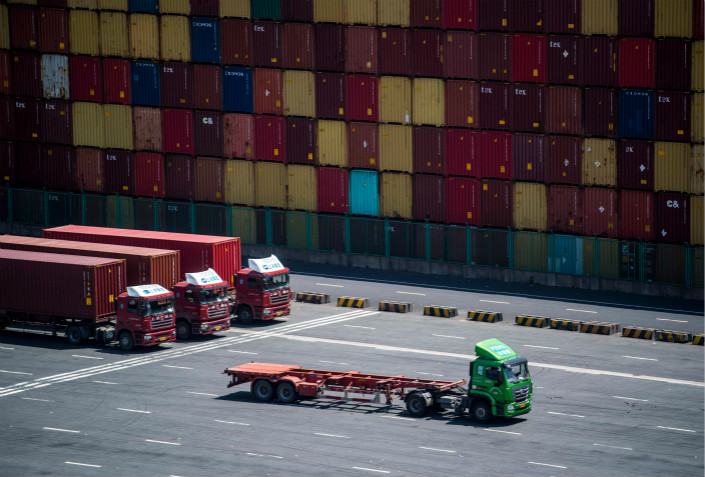 An overhead view of an automated cargo dock at the Yangshan Deep-Water Port in Shanghai on April 9. Photo: VCG

* China’s trade surplus with the United States widened to $22.2 billion in April, its first increase in five months as export growth beats expectations

(Beijing) — Growth in China’s exports and imports rebounded in April, official data showed Tuesday, as the country’s surplus with the U.S. saw its first monthly increase in five months, at odds with Washington’s demand for Beijing to narrow the gap ahead of the resumption of talks to defuse bilateral trade tensions.

Overseas shipments by the world’s largest goods exporter rose 12.9% year-on-year last month to $200.4 billion, reversing a decline of 2.7% in March, according to figures from the General Administration of Customs. The increase was higher than a median forecast of an 8% gain in a Bloomberg News survey of economists.

China’s imports soared 21.5% in April from a year ago to $171.7 billion, the fastest rate in three months, customs data showed. It was also above the analysts’ median forecast of a growth rate of 16%.

That leaves the country with a trade surplus of $28.8 billion, down from $36.3 billion a year ago.

The figures showed that both domestic and foreign demand have remained resilient, analysts said. But they also warned that China’s ongoing trade spat with the U.S. remains a major threat to the sustainability of export growth.

“Today's data should dispel fears of a cyclical slowdown, although the trade dispute remains a risk to the external demand recovery,” Julia Wang, an economist with HSBC Global Research, wrote in a note.

China’s economy grew 6.8% year-on-year in the first quarter, the same pace as in the October-December period. However, the rate has decelerated on a quarterly basis for the second straight quarter. Late last month, the country’s top leaders called for boosting domestic demand to ensure the economy maintains stable growth, a sign the government is prepared to fine-tune its policies to bolster expansion as exports face headwinds amid trade tensions with the U.S.

Exports of products such as electronic integrated circuits increased at a particularly strong pace last month, likely because exporters brought forward their shipments to avoid potential disruptions to the supply chain amid the Sino-U.S. trade tensions, ANZ Research analyst Betty Wang said in a report. “We may see some retreat in exports in the following months,” she said.

China logged a surplus of $22.2 billion against the United States in April, according to Caixin’s calculation based on customs figures. That widened from a surplus of $15.4 billion in the previous month, marking its first month-on-month rise since November.

The massive trade surplus China holds against the U.S. is one of the core disputes between the world’s two largest economies.

U.S. President Donald Trump has threatened tariffs on up to $150 billion worth of Chinese goods to punish China over what it claims are unfair trade policies, including alleged forced technology transfers and violations of intellectual property rights by Chinese companies. China, which denies the accusations, has threatened retaliation in equal measure, including tariffs on U.S. soybeans and aircraft.

Among other requests, Washington demanded Beijing cut China’s trade surplus with the U.S. by $200 billion by the end of 2020 in their negotiations last week, a proposal that Chinese officials have dismissed as “unfair.” Vice Premier Liu He, who is also President Xi Jinping’s top economic adviser, will visit Washington, D.C., next week to resume trade talks, the White House said on Monday.

“The widening China-U.S. trade surplus reflects the difficulty of significantly closing the trade gap between the two countries in the near term,” Wang of ANZ Research said, although she was not convinced that a single month’s figure would cripple the negotiations.

In 2017, China held a $375.7 billion trade surplus in goods and a $38.5 billion trade deficit in services with the U.S., according to data from the U.S. Bureau of Economic Analysis.