Sino-U.S. Trade Talks End With Some Consensus, but Differences Remain 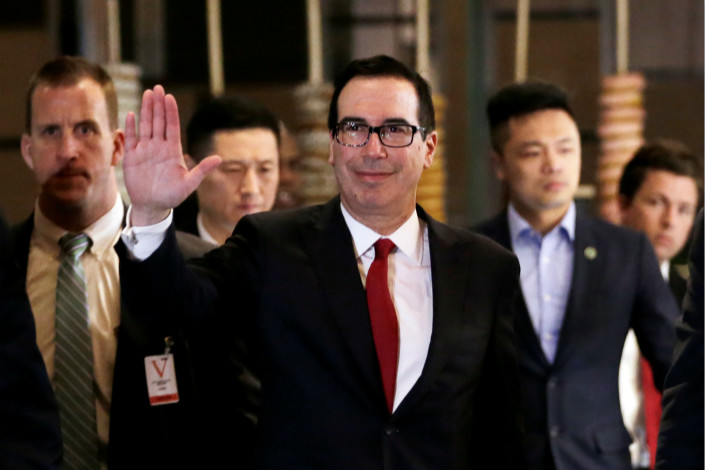 U.S. Treasury Secretary Steven Mnuchin, a member of the U.S. trade delegation to China, waves to the media as he returns to a hotel in Beijing on Thursday. Photo: VCG

* Washington has demanded that China reduce its trade surplus with the U.S. by $200 billion

* Chinese state media says two sides still differ on some issues, though they reached a consensus on others

(Beijing) — Washington wants China to reduce its large trade surplus with the U.S. by more than half over the next two years, foreign media reported, as official Chinese media said after the final day of talks in Beijing that the two sides still differed on some issues although they had reached a consensus on others.

Washington has given China a list of demands, including cutting its trade surplus with the U.S. by $200 billion by the end of 2020, The Wall Street Journal reported Friday, citing a document sent to Beijing before the talks, which ended on Friday. The newspaper quoted Chinese officials as saying the U.S. proposals were “unfair.”

News of the demands emerged on the second and final day of talks between high-level delegations from the two sides, including U.S. Treasury Secretary Steve Mnuchin and Chinese Vice Premier Liu He, President Xi Jinping’s top economic adviser.

The two sides exchanged views on a range of issues, including the expansion of U.S. exports to China, bilateral services trade, bilateral investment, protection of intellectual property rights, and tariff and nontariff measures, the official Xinhua News Agency reported Friday, without elaborating. The two sides have agreed to maintain close communication on relevant issues, Xinhua said.

The U.S. should show sincerity in trade negotiations rather than listing exorbitant demands, Xinhua said Wednesday in a commentary (link in Chinese).

“The chances of a breakthrough trade deal are seen as highly unlikely,” but the meeting could be a positive step for the two countries to avoid a trade war, and continual negotiations could ease tensions, said Lukman Otunuga, an analyst with foreign-exchange broker ForexTime, in a research note.

Economic and trade tensions between the world’s two largest economies have repeatedly escalated in recent weeks, with both sides exchanging tit-for-tat tariff measures and threats.