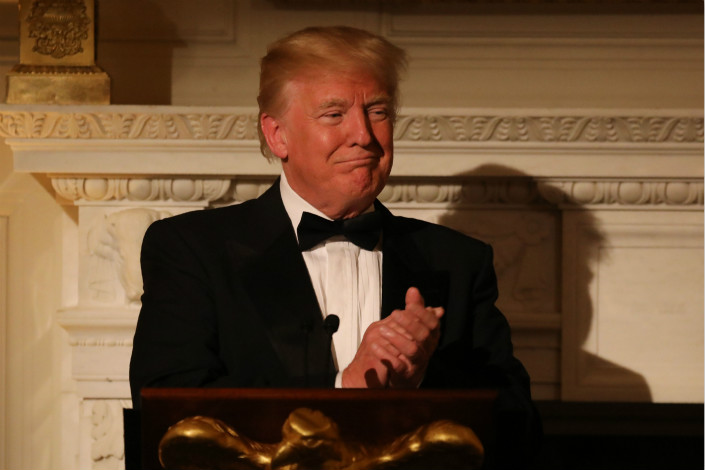 President Donald Trump said Tuesday that the U.S. and China will have a “very good chance at making a deal” on trade.

The statement offers some optimism that the world’s two largest economies will be able to settle their differences and avoid a trade war after weeks of simmering tensions over the issue.

“I think China is very serious, and we're very serious. We have no choice but to be very serious,” Trump told reporters between meetings with visiting French President Emmanuel Macron at the White House.

Trump’s statement came in advance of U.S. Treasury Secretary Steven Mnuchin’s upcoming visit to China for trade negotiations. China said Sunday it would welcome the visit by the U.S. delegation.

Trade tensions between the two countries have repeatedly escalated in recent weeks, with both sides exchanging tit-for-tat tariff measures and threats.

The U.S. agreed to negotiate with China after Beijing earlier this month requested talks with Washington under the dispute-settlement mechanism of the World Trade Organization.

It's normal for economic and trade problems to come up between China and the U.S., and the two sides could resolve their problems through bilateral negotiations or under a multilateral framework, Chinese Foreign Ministry spokesman Lu Kang said at a regular news briefing on Tuesday.

“Definitely, there should not be a unilateral solution,” Lu said.

In late February, China sent a delegation led by Liu He, a key economic adviser to President Xi Jinping, to the U.S. to defuse bilateral trade tensions.

Since he became president, Trump has constantly pressed China to reduce its surplus with the U.S. In 2017, China held a $375.7 billion trade surplus in goods and a $38.5 billion trade deficit in services against the U.S., according to data from the U.S. Bureau of Economic Analysis.