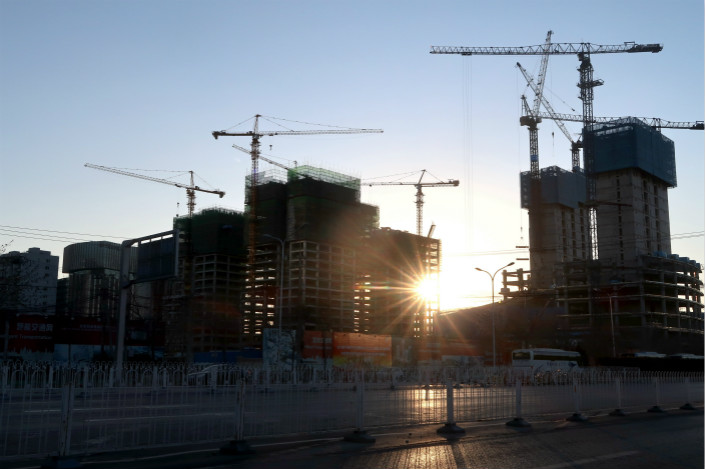 *The Monday Politburo meeting was the first to emphasize boosting domestic demand since 2014, and also noted the ‘tough battles’ ahead and the ‘even more complicated’ situation

*Analysts said that this shift is likely caused by growing Sino-U.S. trade tensions, and will probably result in accelerated infrastructure spending

China’s top leaders have called for action to expand domestic demand to ensure the economy maintains stable growth, a sign the government is prepared to fine-tune its policies to bolster growth as exports face headwinds amid trade tensions with the U.S., analysts said.

“Strenuous” efforts must be made to achieve the goals the government has set for the economy this year, according to a statement released on Monday after a meeting of the Politburo, a key decision-making body comprising the Communist Party’s top 25 officials. The gathering was presided over by party chief Xi Jinping. Premier Li Keqiang in March announced an economic growth target of “around 6.5%” for the world's second-largest economy this year.

Although the economy got off to a good start in the first quarter, with gross domestic product (GDP) increasing by 6.8% year-on-year, there are increasing indications that the pace of growth is moderating. The threat of a trade war with the U.S., China’s second-largest trading partner and biggest export market, is also weighing on confidence and could affect economic activity in the second half of the year.

The Politburo statement said that while there had been an upturn in China's cyclical growth, structural and deep-rooted problems remained and more effort needed to be made to fight the “three tough battles” — controlling risks, reducing poverty and fighting pollution. In addition, the world economic and political situation had become “even more complicated.” Against that backdrop, there is an increased need to be ready to deal with unexpected developments and efforts should be made to tackle and resolve outstanding problems, the statement said.

“We must accelerate structural reforms while at the same time continuously expand domestic demand to keep the economy operating on a stable track,” the statement said.

“We will maintain an active fiscal policy and a stable and neutral monetary policy, and pay attention to guiding expectations.”

This was the first Politburo meeting since December 2014 to emphasize boosting domestic demand, Li Xunlei, an economist with Zhongtai Securities, wrote in a report Tuesday. He said that since 2015, when the government started carrying out supply-side structural reforms to overhaul the economy, statements after Politburo meetings had always highlighted “supply-side reform while moderately expanding aggregate demand.”

This strategy has been a key plank of Xi’s economic policy and has led to campaigns such as cutting excess capacity in industries including steel and coal, and reducing the overall debt level of the economy which focused initially on the financial sector.

The central government tolerated a moderate slowdown in growth over the past three years in order to strengthen structural adjustment and reform, Li said. But the fact that the phrase “continuously expand domestic demand” was included in Monday's statement “shows that the attention the central government is paying to short-term economic stability has grown significantly.”

The Politburo comments about the increasingly complicated world economic and political situation indicate that “preventing large short-term economic volatility may have become an important consideration” of the top leaders, he added.

Although first-quarter gross domestic product (GDP) grew at the same pace as last three months of 2017 on a year-on-year basis, on a quarterly basis, the rate decelerated for the second straight quarter to 1.4%, data from the National Bureau of Statistics (NBS) showed.

Exports were a drag on growth in the first quarter, NBS figures show. The contribution of net exports of goods and services to GDP growth was a negative 9.1% in the January-March period, compared with a positive 1.4% in the first quarter of last year. Most of the growth — 77.8% — came from consumption and investment accounted for 31.3%, according to NBS figures.

In March, China reported a trade deficit of nearly $5 billion, the first in 13 months, and swinging from a surplus of $33.5 billion the previous month, according to Chinese customs data.

Concerns are mounting that the trade dispute between the U.S. and China will deepen and cause damage to industries in both countries and the world economy. Washington has already announced its intention to impose levies on $150 billion of Chinese imports and Beijing has retaliated with proposals for tariffs on $50 billion of U.S. goods, although so far none have been implemented and the two sides are thought to be gearing up for talks to resolve the dispute. But the U.S. raised tensions further last week when it barred ZTE Corp., a Chinese telecom equipment and systems company, from buying American-made components for seven years as a punishment for failing to stick to a previous agreement that penalized the company for selling equipment to Iran.

“Given the escalating Sino-U.S. trade dispute and that foreign demand is obviously being affected, it is not hard to understand why the anchor of economic growth has shifted to domestic demand,” analysts with Ping An Securities said in a note Tuesday.

Analysts with CEBM Group, a subsidiary of Caixin Insight Group, said the government will probably accelerate infrastructure spending, as this would be the fastest way to drive domestic demand, and boost investment in technology and high-tech industries. The year-on-year increase in infrastructure investment moderated to 13% in the first quarter, the slowest pace in data going back to April 2014, as controls over local government debts have been tightened amid an official campaign to control leverage and clean up the hidden liabilities of local authorities.

“The implementation of infrastructure construction projects funded by the central government, such as in the Xiongan New Area, will likely speed up to balance the contraction in local government-funded projects,” they said in a report, referring to a new economic zone south of Beijing established a year ago to boost the development of northern China.

“The door for local governments to raise funds in official ways will be opened wider,” including an expansion in bond issuance, they said.