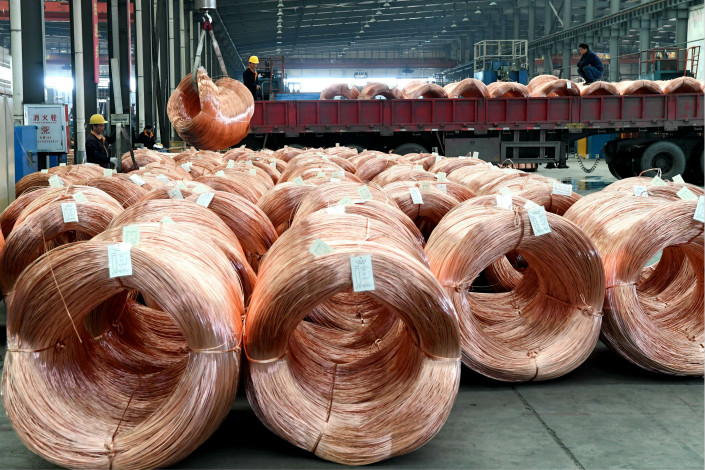 (Beijing) — China’s economy grew 6.8% year-on-year in the first three months of the year, unchanged from the rate seen in the last two quarters of 2017, official data showed Tuesday, as accelerating property investment and consumer spending underpinned the economy.

The growth rate of gross domestic product (GDP) was slightly higher than the median estimate of 6.7% in a Bloomberg News survey of economists, defying expectations of a marginal slowdown.

However, on a seasonally adjusted quarter-on-quarter basis, China’s GDP growth in the first quarter slowed to 1.4% from 1.6% in the previous quarter, decelerating for the second straight quarter, official data showed.

“March activity data was a mixed bag,” HSBC Global Research analyst Julia Wang said in a research note, referring to the weak growth of industrial output and fixed-asset investment along with the strong growth of retail sales.

China’s value-added industrial output, which measures production at factories, mines and the utilities sector, rose 6% year-on-year in March, according to data released by the National Bureau of Statistics (NBS). The monthly increase in industrial output has not been this low since August.

Some analysts have cautioned that the real conditions in the property market may not be as upbeat as suggested by the rise in real estate investment figures recorded by the government. That is mainly because developers usually make their payments a few months after signing land purchase contracts, meaning the high investment data actually reflect the demand and business confidence of the past rather than the present.

Others held a less-pessimistic view. HSBC’s Wang said there is little reason to be overly pessimistic given that land supply policies are turning more proactive and property prices are stabilizing.

Infrastructure investment, which is mainly driven by local government spending and includes the construction of roads, railways and other public facilities, but excludes electricity, heating, gas and water supply, rose 13% year-on-year in the first quarter, NBS figures showed. It marked the slowest increase in data going back to April 2014, according to Bloomberg data.

Analysts have expected infrastructure investment growth to continue to ease due to tightening control over local governments’ financing.

When it comes to manufacturing investment, high-tech industries have outperformed the average. NBS data showed the production of industrial robots and new-energy vehicles surged nearly 30% and 140% respectively in the first quarter. This points to a trend that China is shifting from low-value-added manufacturing to high-tech production, said Iris Pang, an economist with ING Bank NV.

Retail sales, which include spending by households, government departments and businesses, rose 10.1% year-on-year last month, the fastest increase since November.

Consumption growth contributed 77.8% to GDP growth in the first quarter, much higher than 58.8% for the whole of last year, NBS data showed.

“We underestimated the purchasing power of consumers,” ING Bank’s Pang said in a research note.

The retail sales data paints a blooming consumption picture, which also implies that wage growth was decent and employment was steady, she said.

Income of urban and rural residents grew 8.8% year-on-year in the first quarter; the surveyed unemployment rate in urban areas, an indicator that includes migrants’ jobless status, rose slightly to 5.1% in March from February’s 5%, NBS data showed.

A sign of continued expansion momentum in the economy, the size of the rural migrant workforce, increased by 1.1%, or 1.88 million, to 174.4 million in the first quarter from the same period last year, NBS spokesman Xing Zhihong said at a news briefing (link in Chinese) on Tuesday.

Uncertainties remain in the trade sector due to tensions between China and the U.S.

Generally speaking, stable GDP growth in the first quarter will provide a cushion to a likely moderation in the second half of the year amid the country’s intensive reform efforts, said Betty Wang and David Qu, economists with Australia and New Zealand Banking Group.

China’s latest efforts to crack down on “shadow banking” and direct credit back to the real economy will likely help alleviate its debt pressure and mitigate risks, they said.

China is aiming for the economy to grow around 6.5% in 2018, the same as the target set for 2017, with its official projection leaving out the phrase “higher if possible in practice” that was contained in last year’s goal. This omission implies the government is willing to tolerate a slower pace of economic expansion.