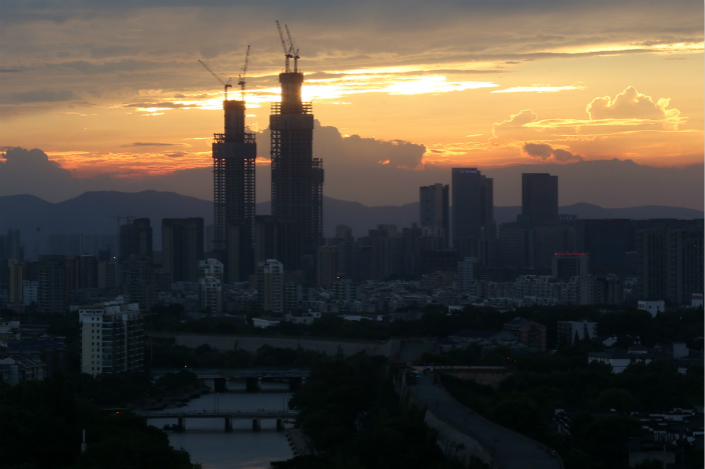 * One analyst has estimated that China’s annual GDP growth will edge down to 6.7% in the first quarter of 2018

(Beijing) — China is scheduled to release its gross domestic product (GDP) data for the first quarter on Tuesday, and analysts have predicted the numbers will show that growth slowed marginally due to a slowdown in investment, which remains the main driver of the world’s second-largest economy.

Last year, China’s economy grew 6.9%, up from a 6.7% increase in 2016, marking the first time growth had accelerated since 2011. The momentum continued into the first two month of this year, but indicators from the investment sector in March have pointed to signs the economy has weakened.

“In March, we expect things to return to normal. Indeed, coal consumption at power plants has already shown a big drop in March,” said Larry Hu, an economist with Macquarie Capital Ltd. in Hong Kong, in a research note.

Hu estimated the year-on-year GDP growth in the first quarter could edge down from 6.8% in the fourth quarter of last year to 6.7%, which is in line with the latest prediction made by the State Information Center, a think tank backed by China’s central government.

Consumer spending growth has remained stable for months. While uncertainties in China’s economy currently come from the export sector, which might be dragged down by the trade tensions between China and the U.S., certainties are the weak signals in the investment sector.

Real estate investment, which amounted to 13.3% of the country’s GDP last year, rose 9.9% year-on-year in the first two months of 2018, a faster pace than the 7% growth notched in 2017. However, analysts say that the rise was mainly due to a delayed effect, as developers often pay bills within a few months of signing land purchase contracts. Other indicators, such as land acquisition, new construction starts and property sales, have all slowed.

Real estate investment growth is likely to slow because developers have not been purchasing land or building projects at the same pace as they had in the past due to tightening government controls, said Li Huaijun, an analyst with First Capital Securities Co. Ltd., in a research note.

Infrastructure investment, a driver equal to about 16.9% of GDP last year, is widely expected to slow, as the central government has rolled out multiple policies since 2017 to clamp down on local government financing. The latest move came last month when the Ministry of Finance asked banks and other financial institutions not to lend to local governments other than by buying their bonds.

The growth of manufacturing investment has been quite slow since the second half the 2016, according to calculations by First Capital Securities based on government statistics.

The Caixin China General Manufacturing Purchasing Managers’ Index (PMI), which focuses on light industry and the service sector, fell to 51 in March, the worst reading since November, indicating the country’s manufacturing activity grew at its slowest pace in four months. A number greater than 50 indicates an expansion in activity, while one less than 50 reflects a contraction.

In contrast, the official manufacturing PMI released by the National Bureau of Statistics (NBS), to which the heavy industry contributes a large share, rose to 51.5 in March, the highest in the first three months of the year. Analysts view the rise as a seasonal bounce as the reading has never dropped in March. The NBS manufacturing PMI in the first quarter was 51.0, weaker than in both the first quarter and fourth quarter of last year.

On the positive side, inflation pressure, a concern earlier this year, has cooled. Analysts expect it to be muted this year, leaving room for the central bank to ease monetary policy if economic growth slows too drastically.

Another factor, slower annual growth of China’s M2, a broader gauge of money supply, also leaves room for the monetary authority to act.

Beijing is also likely to step up the pace of deleveraging, which will be worth keeping an eye on because there’s a chance it could hurt the economy.

After spending the past three months wrapping up an overhaul of government agencies and personnel, policymakers have started to focus on deleveraging, said Hu from Macquarie Capital. It’s almost certain that more tightening measures are in the pipeline, he added, expecting economic growth to face more headwinds in the second half of this year.

China is aiming for GDP growth of around 6.5 percent in 2018, the same as the target set for 2017, with its official projection leaving out the phrase “higher if possible in practice” that was contained in last year’s estimate. This omission implies the government can tolerate a slow pace of economic growth.