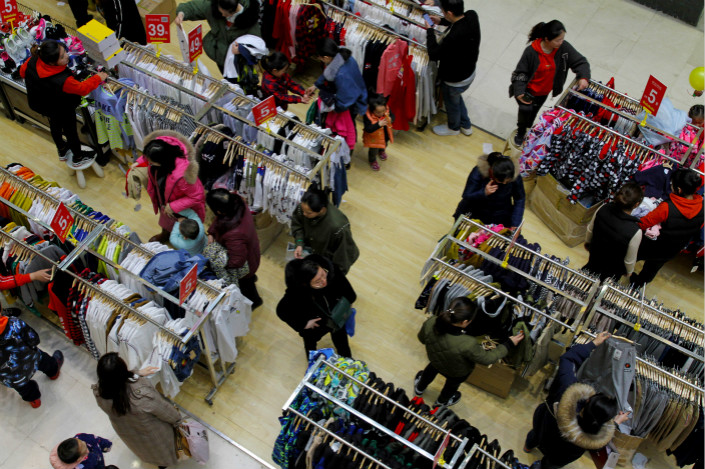 * The producer price index, which reflects changes in the prices of factory goods, increases 3.1% in March

Consumer inflation slipped to 2.1% in March from a four-year high in February, while producer price inflation fell for the fifth straight month, government data showed Wednesday.

The consumer price index (CPI), which tracks the prices of a basket of consumer goods and services, rose 2.1% year-on-year in March, 0.8 percentage points below the previous month’s reading, according to data from the National Bureau of Statistics. The decline was driven largely by slower growth in food prices.

On a month-on-month basis, the headline CPI declined 1.1% in March, as the week-long Lunar New Year holiday fell in February this year. Seasonal declines in food, tourism and transport prices mainly accounted for the drop.

Analysts have put forward different forecasts for the CPI this year. Julian Evans-Pritchard, senior China economist at research firm Capital Economics, believes that consumer inflation will continue to edge down in the coming quarters, despite volatility in food prices.

Wendy Chen and Lisheng Wang, economists at Nomura International (Hong Kong) Ltd., expect a mild pickup in the CPI through this year, likely driven by high food and services prices, as well as the pass-through impact of high producer and property prices.

The producer price index (PPI), another closely watched figure that reflects changes in the prices of factory goods, increased 3.1% in March, further easing from February’s 3.7%, marking its lowest level since November 2016.

Nomura’s Chen and Wang expect the PPI to drop lower in the second half of this year due to weakening investment demand, the cooling property market and rising financing costs. Meanwhile, they expect a minor rebound in the second quarter as the base was low last year, according to their analyst note.

Evans-Pritchard with Capital Economics holds a more aggressive view, predicting that the PPI might slide into negative territory by the end of this year. “(The) inflation data are consistent with our view that cooling price pressures will open the door to monetary easing this year,” he said in a note, expecting China’s central bank to guide market interest rates lower this year in response to a cooling economy.

In contrast, Chen and Wang have a more conservative forecast for monetary easing. They expect the central bank to maintain its prudent and neutral monetary policy stance in the quarters ahead, with a possibility of cutting the reserve requirement ratio (RRR) again this year after the targeted RRR cut in January.

An RRR cut this year would be done to ensure stable liquidity conditions and avoid a sharp drop in loan and aggregate financing growth, the analysts said.

China’s central government has set the annual CPI growth target at around 3% this year and refrained from setting a target for PPI as usual.