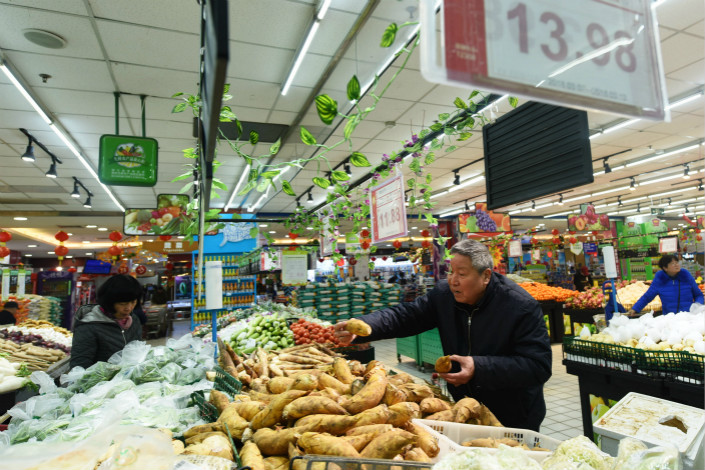 Consumer inflation shot up to a four-year high as growth in industrial prices declined for a fourth straight month, official figures showed.

The consumer price index (CPI), which gauges the price of a basket of consumer goods and services, soared 2.9% in February from a year ago, picking up from a mild growth of 1.5% in January, according to the data released by the National Bureau of Statistics (NBS) Friday.

The NBS attributed the sharp increase in consumer inflation to the timing of this year’s week-long Lunar New Year holiday, which fell in February. Last year, the holiday occurred in January.

“The different timing of Lunar New Year resulted in a relatively lower base for comparison in February,” NBS analyst Sheng Guoqing said in a statement following the data release. “The higher prices of food and services measured on a month-on-month basis in both periods before and after the Lunar New Year also sent year-on-year inflation higher.”

By contrast, the producer price index (PPI), a barometer for the changes in the prices of factory goods and mining products, increased 3.7% in February, further easing from a growth of 4.3% in January and marking its smallest increase since November 2016.

The PPI slowdown was mainly driven by weaker increases in five industrial categories, such as nonmetallic mineral products, manufacturing of ferrous and nonferrous metals, oil refining and manufacturing of chemical raw materials and products, Sheng said. Together, they dragged the PPI down by 0.57 percentage points, he said.

Economists blamed the jump in CPI on food price inflation, which has a weighting of about a third in the headline figure and swung to an annual increase of 4.4% in February from a decline of 0.5% in January. “Fruit and vegetable prices rose sharply ahead of the holiday,” Liu Chang, China economist at research firm Capital Economics, said in a research note.

“Seasonal factors also played a role in pushing up nonfood inflation,” Liu added, “with transport and tourism inflation both boosted by the favorable base effects from last year.”

Liu predicted food-price inflation will continue to edge up over the next few months “as an unusually sharp fall in vegetable and fruit prices after Lunar New Year in 2017 will provide a weak base for comparison.”

“But this will be short-lived and is unlikely to trigger further policy tightening,” he added. In addition, he predicted that authorities are likely to begin easing monetary policy later this year if a decline in broader price pressures weighs on economic growth.