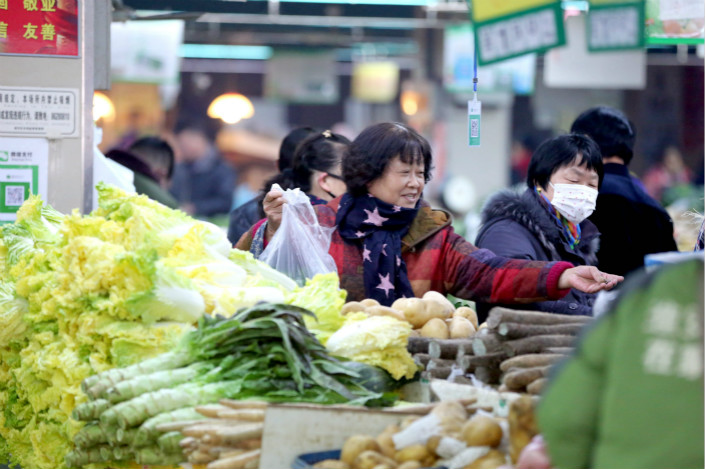 People buy vegetables at a market in Huaian, Jiangsu province on Jan. 9. Within the consumer price index, food prices, which account for about a third of the index and have the biggest influence on the indicator, fell 0.5% year on year after a 0.4% decline in December, while tourism costs decreased 4.2%, the authorities said. Photo: VCG

Consumer inflation in China eased to a half-year low in January mainly due to seasonal distortions, while the increase in industrial prices slowed for the third straight month.

The consumer price index (CPI), a gauge of prices of a basket of consumer goods and services, rose 1.5% (link in Chinese) last month from a year ago, the smallest increase since July and down from December’s growth of 1.8%, figures released Friday by the National Bureau of Statistics (NBS) show.

The producer price index (PPI), which measures changes in the prices of goods bought and sold by manufacturers and mining companies, climbed 4.3% (link in Chinese) year on year in January, easing from 4.9% in the previous month and the weakest increase since November 2016, NBS data showed.

Within the CPI, food prices, which account for about a third of the index and have the biggest influence on the indicator, fell 0.5% year on year after a 0.4% decline in December, while tourism costs decreased 4.2%, the NBS said.

Analysts attributed the moderation in consumer inflation partly to distortions caused by the timing of the week-long Lunar New Year holiday, which changes every year. Retailers usually raise prices ahead of the holiday as consumers splurge on food and gifts and transport costs rise as migrant workers travel home for family reunions. The festival fell in late January in 2017, which pushed up the comparison base for last month. The holiday starts on Feb. 15 this year and is expected to lead to a temporary jump in prices which will also distort the month's comparisons with the year earlier period.

“The latest drop in consumer price inflation is largely seasonal and should reverse this month,” Julian Evans-Pritchard, an analyst with research firm Capital Economics, said in a note.

The moderation in price increases last month was more broadly based with a softening in core CPI, which excludes the more-volatile food and energy prices and which economists say better reflects the long-term trend in inflation. Core inflation eased to 1.9% year on year last month from 2.2% in December, while price gains in services slowed to 2.3% from 3%, NBS figures showed.

The slowdown in the producer price index was mainly driven by weaker increases in four industry categories: oil and natural gas extraction, oil refining, manufacturing of chemical raw materials and products, and manufacturing and processing of ferrous metals — mostly iron and steel, NBS analyst Sheng Guoqing said in a statement. Together, they dragged the PPI down by 0.4 percentage points, he said.

Economists expect growth in industrial inflation to stabilize or continue to decelerate this year due to a high comparison base last year and the waning effect on prices of the country’s campaign to cut excess capacity in sectors including coal and steel. The policy, which started in 2016, sent prices soaring and contributed to a strong rebound in the PPI that peaked at 7.8% in February 2017.

Rong Jing, an analyst with BNP Paribas, told Caixin she doesn't expect the campaign will lead to steep cuts this year because the industrial production-to-capacity ratio has risen to its highest level in five years. “There's no good reason for the government to push deep cuts in capacity because that will only further squeeze supply and won't be good for the economy,” she said.

The government has set an annual ceiling of 3% for the CPI since 2015 — it will set the goal for 2018 at the National People's Congress in March. But the monthly CPI has for the most part remained well below that level and analysts are projecting continued mild price rises this year. As a result, the People's Bank of China's monetary policy stance is unlikely to be influenced by domestic consumer inflation, at least in the short term.

The central bank has engineered an increase in interest rates in the interbank market, an increasingly important part of its monetary policy toolbox, over the past year to rein in shadow banking and force financial institutions to deleverage. But it has not raised benchmark interest rates for banks serving retail customers and companies.

Rong said any easing of the tightening bias in monetary policy this year will still depend on how far government efforts to stem financial risks will go, rather than inflation. “The central bank’s monetary policy is unlikely to change in the short term given that regulators have indicated they will keep financial oversight strict in their statements made so far this year,” she said.