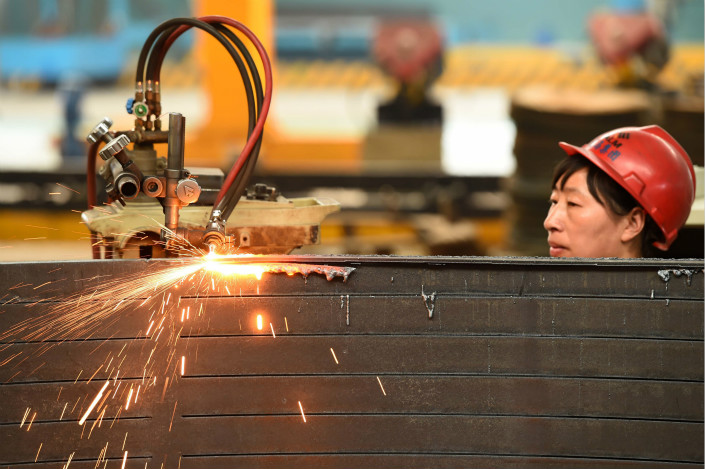 A worker welds wind power equipment on March 31 at a factory in Shandong province. Photo: VCG

The Caixin China General Manufacturing Purchasing Managers’ Index (PMI) fell to 51 in March from 51.6 the previous month, the worst reading since November. It was also the first time in four months that the figure dropped.

The indicator is closely watched by investors as one of the first available monthly barometers of the health of the world’s second-largest economy. A number greater than 50 indicates an expansion in activity, while one less than 50 reflects a contraction.

The slowdown was mainly driven by a weaker expansion in output and a quicker decline in head counts at manufacturing companies, as demand — particularly from overseas — lost steam, said Zhong Zhengsheng, director of macroeconomic analysis at CEBM Group.

“The manufacturing PMI reading in March showed that demand was not as strong as expected, leading to a lower willingness of manufacturers to produce and restock,” he said.

In contrast, the official manufacturing PMI, released by the National Bureau of Statistics (NBS) on Saturday, rose to 51.5 in March from 50.3 in the previous month on faster expansion in production due to growth in new business, particularly exports.

The Caixin PMI, sponsored by Caixin and compiled by international information and data analytics provider IHS Markit Ltd., focuses on light industry, while heavy industry makes up a larger share of the NBS survey. The geographic distributions of the companies covered in the two surveys are also different.

Production and total new orders both expanded at their weakest rates in four months, while the increase in export sales was the slowest since May, according to the Caixin survey.

Uncertainties in China’s exports rose significantly after U.S. President Donald Trump on Thursday instructed U.S. Trade Representative Robert Lighthizer to propose tariffs on at least $50 billion in Chinese products following a seven-month investigation into the Asian nation’s intellectual property practices. The administration justified the tariffs under the rarely used Section 301 of the Trade Act of 1974.

Analysts have expected that the new levies will likely target the sectors in which China has said it wants domestic companies to develop into global leaders through its “Made in China 2025” drive.

On Friday, the U.S. started applying tariffs on steel and aluminum products imported from countries that include China.

Washington’s moves unsurprisingly triggered retaliation from Beijing, which unveiled a plan on Friday to impose taxes on $3 billion worth of American imports such as fruit, wine, pork, seamless steel tubes and recycled aluminum.

The proposed tariffs under Section 301 will not take effect until early May, and politicians and business leaders have urged the two countries to take advantage of the gap to negotiate a deal to cool the tensions.

The Caixin survey showed that staff numbers at Chinese manufacturing companies declined at the fastest pace since August amid reports of cost-cutting plans.

The growth in quantity of purchases also fell to their lowest since November, while stocks of finished goods rose for the second straight month, reflecting relatively subdued sales.

However, chances for manufacturers to make a profit look to have increased because they were able to raise output prices at the fastest pace in three months as the jump in input costs dipped to its lowest level in nine months.

Confidence in growth prospects over the next 12 months improved to a one-year high amid forecasts of greater investment and expectations of better market conditions, the survey showed.

The Caixin China General Services Business Activity Index is scheduled to be published on Wednesday.