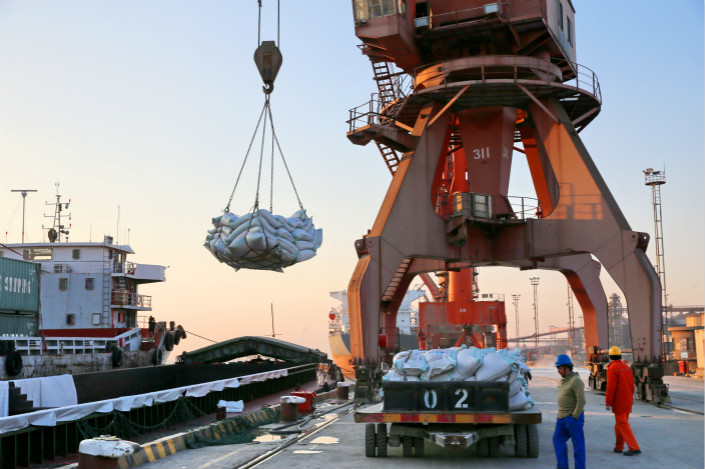 China on Friday warned that the U.S. risks dragging bilateral trade relations “into danger” after President Donald Trump announced new tariffs on Chinese goods and Beijing released a plan to impose taxes on $3 billion worth of American imports.

China’s Ministry of Commerce blasted the U.S. move as underscoring “typical unilateralism and trade protectionism” and said it would take action to protect the country's interests.

“China does not want to fight trade wars. Yet China is absolutely not afraid of trade wars,” an unnamed commerce ministry spokesperson said in a Chinese-language statement. “We are confident and capable of dealing with any challenges.

“We hope the U.S. stops its (practices) before it is too late, makes prudent decisions, and doesn’t drag bilateral trade relations into danger,” said the spokesperson, adding that China is “fully prepared to firmly protect its legitimate interests.”

The trade office will target Chinese goods “with an annual trade value commensurate with the harm caused to the U.S. economy resulting from China’s unfair policies,” according to the Section 301 Fact Sheet. This value is estimated to be “at least $50 billion per year,” it added. Trump said that the amount could be even bigger, at “about $60 billion.”

The tariffs will not take effect immediately. Lighthizer will have 15 days to release a list of Chinese goods and services that will be targeted, followed by a 30-day public comment period.

China is preparing to enforce its own tariffs. The commerce ministry said it is considering a 15% import tax on $977 million worth of American fresh fruits, nuts, wines, and seamless steel tubes, and a 25% levy on $1.99 billion worth of U.S. pork, recycled aluminum and other goods.

The plan intends to “balance losses to Chinese interests caused by the U.S. tariffs on steel and aluminum products,” an unnamed ministry spokesperson said in a separate statement. Earlier this month, Trump signed an order to slap taxes of 25% on steel and 10% on aluminum products imported from countries including China. The tariffs are effective Friday.

Beijing will impose the 15% reciprocal levy if China and the U.S. fail to reach an agreement on the trade actions within a set period of time. The 25% tax will be introduced after “a further evaluation of the impact of U.S. measures on China” is completed, the ministry statement said.

“China retains the right to adjust our measures according to actual conditions and will go through the necessary procedures according to the rules of the World Trade Organization (WTO),” it added.

The ministry said it will seek public consultation on the proposals before they are implemented.

The statement accused the U.S. of restricting imports under “the excuse of national security,” which has “gravely damaged the multilateral trade system represented by the WTO” and “severely disrupted the normal international trade order.”

The latest actions taken by Washington and Beijing increase the likelihood of a full-blown trade conflict between the two countries, with analysts voicing concern that the moves will add to global trade tensions.

Trump is “deliberately” relating trade measures to foreign policy, such as granting exemptions from some of the new tariffs to countries with security partnerships with the U.S., which will likely encourage these nations to take sides and adopt a hard-line policy toward China, Raymond Yeung and Daniel Wilson, analysts at Australia and New Zealand Banking Group, said in a note.

“Our major worry is whether President Trump’s tactical approach will spill over to the rest of the world,” they wrote. “Just as China wishes to deepen its economic ties with the rest of the world in President Xi’s ‘New Era,’ Trump’s China policy may result in a divided world, risking not only global economic recovery but also stability.”

Chinese customs data show that in the first two months of this year, the surplus jumped 35% year-on year to $42.9 billion.

Chinese and American business groups on Friday called on the two governments to soothe frictions through dialogue and avoid a trade war.

The American Chamber of Commerce in Shanghai, which says it will provide input to Washington’s proposed tariffs on behalf of its 3,000 members, urged the Trump administration to “not to impose tariffs as its principal response” to China’s trade practices while prodding Beijing to “take meaningful action” to facilitate free trade.

“AmCham Shanghai believes that the American and Chinese governments should resolve existing trade frictions in a way that averts a trade war and promotes open markets and fair economic exchange,” it said in a statement.

The China Council for the Promotion of International Trade, a state-funded trade body, urged the two sides to settle their differences without resorting to open conflict.

“We strongly call on the U.S. government to work together with the Chinese government to resolve disputes in a constructive way and avert the outbreak of a trade war,” it said in a statement on its website.