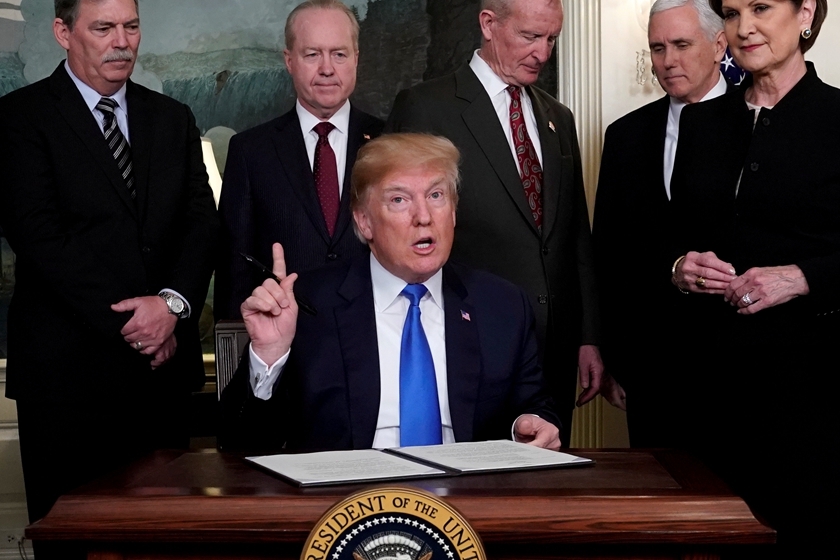 The amount represents more than 10% of all Chinese goods sent to the U.S. last year. China’s exports to the U.S. totaled $505.6 billion in 2017, according to the U.S. Department of Commerce.

“It would be about $60 billion, but that is really a fraction of what we are talking about,” Trump said as he signed the executive memorandum to impose the new tariffs.

The tariffs will not take effect immediately. U.S. Trade Representative Robert Lighthizer will have 15 days to release a list of Chinese goods and services that will be targeted, followed by a 30-day public comment period.

“It is the largest deficit of any country in the history of our world. It is out of control,” Trump said.

The White House said 25% additional duties will be imposed on certain products in sectors including aerospace, information communication technology and machinery.

The Department of Treasury, in consultation with other agencies, will propose restrictions on investment by China in sensitive U.S. technology, the White House also said in its news release.

The new tariffs, imposed under Section 301 of the 1974 U.S. Trade Act, follow a seven-month investigation into China’s intellectual property practices, which U.S. officials charge have cost American companies billions of dollars in lost revenue and killed thousands of U.S. jobs.

The latest move comes on the heels of the Trump administration's imposition of tariffs on steel and aluminum, which also took aim at China. In January, the U.S. also levied tariffs on imported solar equipment and washing machines.

China’s Ministry of Commerce said in a statement on Thursday Beijing time before the announcement that the country would hit back if the U.S. imposed new tariffs.

“China will not sit back as the U.S. hurts its interests, and will certainly take all necessary measures to resolutely defend its legitimate rights and interests,” the ministry said.

Hua Chunying, a spokeswoman of the Ministry of Foreign Affairs, said the same day at a press briefing that China doesn’t want a trade war but won’t recoil from one. “If the day did come when the U.S. took measures to hurt our interests, we will definitely take firm and necessary countermeasures to safeguard our legitimate interests,” said Hua.

Some Chinese academics have predicted that China will respond with limited tit-for-tat measures, such as raising tariffs on certain U.S. products like farm produce and automobiles.

Concerns about a trade war between the economic giants are growing.

“A trade war would be very costly for the United States, very costly for China as well,” said Lawrence Summers, a former U.S. Treasury secretary and head of the National Economic Council under then-U.S. President Barack Obama.

“Even after the trade war has been settled in some way, the knowledge that there had been a trade war and therefore the possibility of (trade) being cut off again would reduce the tendency to trade in the future. And that would have a further compromising cost,” Summers told Caixin in Beijing on Wednesday.

Chinese Premier Li Keqiang said on Tuesday that there is no winner in a trade war. “I believe that a trade war does no good to either side,” Li said.

Some economists and U.S. business groups have warned that tariffs could in fact hurt American consumers and economic growth. Yukon Huang, a senior fellow at the Carnegie Endowment for International Peace, said in a column published on the Caixin Global website that the tariffs on solar-products imports could lead to thousands of jobs being lost in the U.S. installation business compared to several hundred jobs being protected in the U.S. solar panel manufacturing sector.

Thomas Donohue, president and CEO of the U.S. Chamber of Commerce, last week urged the administration not to impose broader tariffs on China, contending that “tariffs of $30 billion a year would wipe out over a third of the savings American families received” from last year’s U.S. income tax reform.