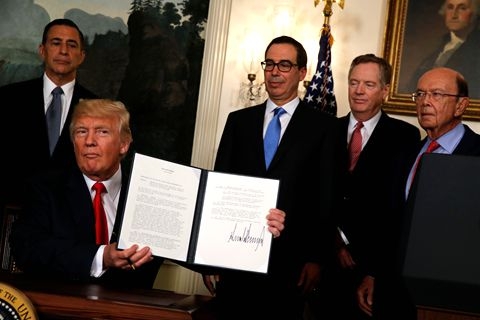 Tensions between Washington and Beijing are running high as the Trump administration is reportedly set to unveil tariffs worth as much as $60 billion annually on Chinese products — a move many fear would lead to a trade war.

U.S. media outlets reported that the White House is likely to announce punitive tariffs on Chinese imports by Friday. The tariffs reportedly would apply to $30 billion to $60 billion worth of Chinese goods a year, covering technology, telecommunications and consumer products. Other curbs, such as further restrictions on Chinese investment in the U.S., may follow.

The tariffs would be imposed under Section 301 of the 1974 U.S. Trade Act, following an investigation led by U.S. Trade Representative Robert Lighthizer last year into China’s intellectual property practices. Of particular concern is Beijing’s policy that mandates U.S. companies transfer technological know-how to Chinese partners if the firms want to gain access to the world’s second-largest economy.

The expected move follows the administration’s recent imposition of tariffs on steel and aluminum imports. Earlier in January, the U.S. also levied tariffs on imported solar equipment and washing machines. Analysts said that China is the ultimate target of such measures.

Commenting on the U.S. acts, Wang Shouwen, China’s commerce vice minister, said at a World Trade Organization ministerial meeting this week in New Delhi that China will actively take steps to safeguard its interests as well as those of its industries.

“The U.S. decision to launch trade investigations is a unilateral act of protectionism,” Wang was cited as saying in a statement (Link in Chinese) published at the ministry’s website Wednesday.

Some Chinese scholars said the U.S. actions may lead China to take quid-pro-quo measures. “It is possible that China will impose similar restrictions on U.S. imports and investments,” said Qu Xinquan, a professor at the University of International Business and Economics in Beijing.

The escalating trade tension has fueled concerns over the possibility of a trade war between the world’s two largest economies.

“I am pretty worried about a trade war. I think the world would stay out of a big trade war, but I am less sure than I was a year ago,” said Lawrence Summers, former U.S. Treasury secretary and one-time head of the U.S. National Economic Council under then-U.S. President Barack Obama.

“A trade war would be very costly for the United States, very costly for China as well, and even after the trade war has been settled in some way, the knowledge that there had been a trade war and therefore the possibility of being cut off again would reduce the tendency to trade in the future. And that would have a further compromising cost,” Summers told Caixin in Beijing on Wednesday.

“If Americans think a trade war would help America, they are wrong. It would destroy more jobs than it creates,” Summers said.

In an opinion column published on the Caixin Global website, Yukon Huang, a senior fellow at the Carnegie Endowment for International Peace, said the tariffs on solar-products imports may lead to thousands of jobs lost in the U.S. installation business relative to protecting several hundred jobs in production. Huang said the increase in productivity, rather than the trade deficit with China, is the major factor in the loss of jobs.

“Tariffs of $30 billion a year would wipe out over a third of the savings American families received from” last year’s U.S. income tax reform, Donohue said in a statement. “If the tariffs reach $60 billion, which has been rumored, the impact would be even more devastating,” he said.

Premier Li Keqiang said on Tuesday that China wants to avoid a trade war. Speaking at the conclusion of the annual National People’s Congress meeting, the premier said China will further open its manufacturing sector, lower import tariffs and cut taxes. China won’t force foreign companies to transfer technology to domestic ones and will protect intellectual property, he said.